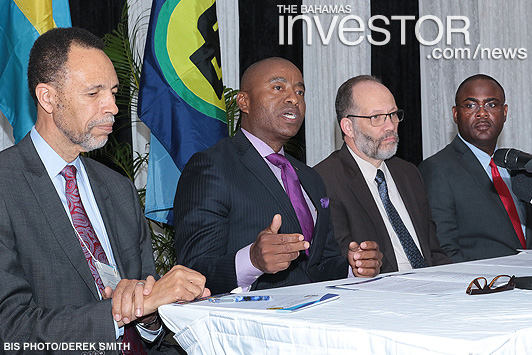 Migration, climate change and border issues were central concerns addressed by CARICOM‘s Council for Foreign and Community Relations (COFCOR) during its two days of meetings in Nassau, May 7-8, as part of the 21st conclave, at the British Colonial Hilton.

Minister Henfield said: “I believe that this conference was a grand success and we were able to discuss many issues of mutual interest.”

He noted that some issues such as migration would require continuous dialogue via bilateral agreements.

With regards to bilateral relations, discussions were held about relations with the US, the UK, and Canada.

“The COFCOR discussed approaches that would enable the community to strengthen its relations with the US,” he said.

The Minister said issues such as Brexit were also discussed, and remarked that the UK’s decision to leave the European Union would present the CARICOM community with both opportunities and challenges.

He said CARICOM welcomed recent efforts by Canada to engage the community, but recognized the need for regular political dialogue between the two parties.

Other issues discussed during COFCOR included:

The Minister said that the presentation was of particular interest during the conference.

It was noted that Foreign Ministers also expressed concern over the trend of equating remittances with development aid, in recognition of the former not necessarily contributing to development.

After two days of meetings, delegates enjoyed a closing reception at Government House on Tuesday evening. Pictured: Minister of Foreign Affairs Darren Henfield, left, speaks to members of the media at the close of the 21st meeting of the Council for Foreign and Community Relations (COFCOR) during a press conference held at the British Colonial Hilton May 8, 2018. CARICOM Secretary General Irwin LaRocque looks on. (BIS Photo/Derek Smith)