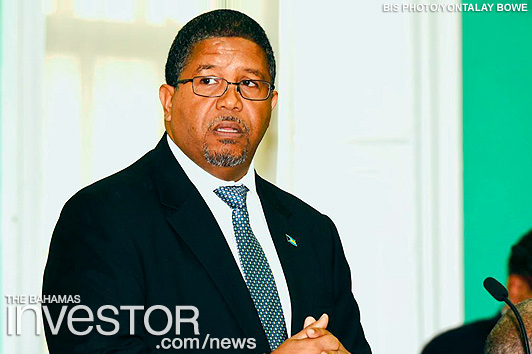 Speaking in the House of Assembly yesterday, Deputy Prime Minister and Minister of Finance Peter Turnquest said the Bahamian economy would not escape the fallout from the Covid-19 global health crisis, at least not in the short term.

Speaking in the House of Assembly yesterday, Deputy Prime Minister and Minister of Finance Peter Turnquest said the Bahamian economy would not escape the fallout from the Covid-19 global health crisis, at least not in the short term.

As he presented the Statement on the Fiscal and Economic Impact of Covid-19 in the House of Assembly March 18, DPM Turnquest explained that economic growth in the short term will be negatively affected by global and domestic developments, and an overall contraction in domestic short-term economic growth is inevitable.

He stated: “Many people are understandably afraid, but I want to reassure Bahamian families that we will get through this challenge together, healthy, stable and strong.”

The DPM stated that when faced with crisis situations, such as the Coronavirus, good and open communication and collaboration with stakeholders are important building blocks to preparing an effective and well-considered response that delivers the best results for the public at large.

“I am indebted to industry representatives from the banking community – the Bahamas Chamber of Commerce and Employers’ Confederation, the Bahamas Institute of Chartered Accountants, and other respected Bahamian economists from the University of The Bahamas and elsewhere – who responded to my invitation to provide feedback on the Ministry’s initial economic modelling.”

He said they provided insightful recommendations on the ways the government could alleviate the concerns of Bahamians impacted by the virus.

DPM Turnquest said he is also grateful to the Shadow Minister of Finance, Chester Cooper, for taking the time to meet with the Ministry of Finance and for the input he provided to our toolkit of possible actions. Several of his recommendations have been incorporated.

He stated that in keeping with the responsibility for sound governance, the Ministry of Finance undertook to model assumptions on the likely impact of the coronavirus over the next four-month period to mid-July 2020.

“We ran three scenarios – low, medium and high impact – based on assumptions of varying degrees of losses for tourist arrivals over a four-month period.

“The projections produced by these scenarios are by no means precise and all-encompassing, as the fallout in tourism will have a cascading impact on a number of other sectors within the domestic economy. However, the outcomes for each scenario within this preliminary assessment will help us to adopt a reasonable and responsible approach to contingency planning.”

He said while the total economic impact could be as low as $258 million over the next four months to June 2020, the government is inclined to focus on the high impact scenario, which assumes 100 per cent loss of cruise visitors and 80 per cent of stopover visitors.

“In fact, recent developments in the industry would suggest a titling of the possible actual outcome to this extreme scenario, which could result in a total economic loss, including additional public sector spending requirements, of as much as $1 billion.”

The DPM said of this total, a dominant $832 million decline is projected for lost tourism related expenditure as a result of the reduced visitor count.

The direct hit on government revenue is placed at an aggregated $108 million—$48 million for direct border taxes paid by visitors, and a total of $60 million for potential VAT and imports duty losses. The expenditure requirements could reach $49 million, of which we are funding $10 million from dormant account fund.

He explained that these resources would be used to address the health and social requirements arising from potential cases of the virus and dislocations associated with job losses and the need to support small businesses.

The Caribbean Association of Banks is calling for banks to review their business continuity plans and promote greater use of technology as the sector grapples with the economic repercussions of the current Coronavirus outbreak.