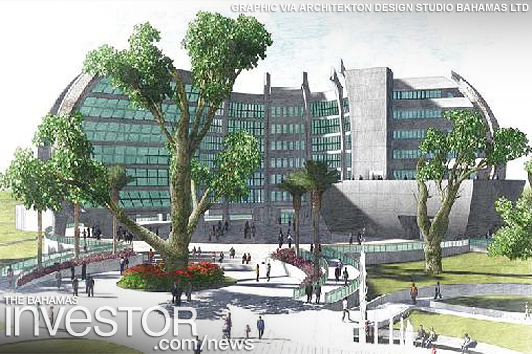 Plans for The Central Bank of The Bahamas' new facility were unveiled on Friday, as part of its Nassau Reimagined project which aims to upgrade and rejuvenate the downtown area. (Image courtesy Architekton Design Studio Bahamas Ltd)

Plans for The Central Bank of The Bahamas‘ new facility were unveiled on Friday, as part of its Nassau Reimagined project which aims to upgrade and rejuvenate the downtown area.

The project invited architects to submit ideas for a new and upgraded bank building. A panel of five judges selected local architect Jason Lorandos (pictured), of Architekton Design Studio Bahamas Ltd, as the winner of its Urban Planning and Architectural Design competition – awarding him a $50,000 prize.

Lorandos’s design was praised for its “boldness and audacity”, and the judges noted its “deep thoughtfulness about the urban environment and the public spaces”. The judging panel included University of The Bahamas professor Dr Nicolette Bethel and artist Antonius Roberts.

The winning concept includes open green space and public walkways, in keeping with the Central Bank’s mission to upgrade and modernise its offices.

Governor of the Central Bank John Rolle said the bank has outgrown its current facilities and, with this new move, hopes to spur further development in the downtown area.

The redesign plans will now be presented to government for approval.

Migration, climate change and border issues were central concerns addressed by CARICOM's Council for Foreign and Community Relations during its two days of meetings in Nassau, May 7-8, as part of the 21st conclave, at the British Colonial Hilton.