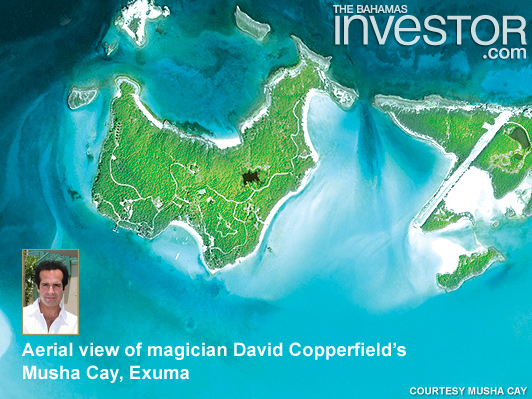 To truly live the lifestyle of the rich and famous, you must have at the very least a private jet or a private yacht. But the pinnacle of A-list celebrity, however, is owning your own private island in paradise.

The Bahamas boasts the highest concentration of celebrity-owned private islands anywhere in the world–and for good reason. There are more than 700 islands and cays in the Bahamian archipelago–each one blessed with pristine white beaches, stunning vistas and spectacular waters, among the world’s clearest.

At press time, Beyonce and Jay-Z were reportedly in the process of inking a deal worth approximately $3 million to purchase Strangers Cay in the northern Bahamas.

Hollywood royalty Johnny Depp (pictured) fell in love with the Exumas when filming Pirates of the Caribbean and purchased Little Hall’s Pond Cay in 2004 for a reported $3.6 million. The idyllic island is ringed with numerous sun-soaked beaches all named after Depp’s close friends and family–Gonzo Beach is dedicated to the late Hunter S Thompson; Brando Beach, named for his idol Marlon Brando; and Paradis, Lily Rose and Jack beaches, named for his former partner Vanessa Paradis and their two children. The island also sports a snorkelling spot called Heath’s Place for the late actor, Heath Ledger.

Depp reportedly visits his island retreat often when he wants to escape from the long lenses of the paparazzi. In a 2009 interview with Vanity Fair, he remarked: “I don’t think I’d ever seen any place so pure and beautiful. You can feel your pulse rate drop about 20 beats. It’s instant freedom.”

Magical getaway
Magician David Copperfield is another celebrity who is enamored with the beauty of the Exuma chain. In 2006, he bought up to 11 islands for $50 million, including Musha Cay, a 150-acre island once owned by John Melk, a business tycoon who was one of the original partners of Blockbuster video chain.

Copperfield, who is now one of the faces of the Ministry of Tourism’s “Behold–The Bahamas” advertising campaign, spent upward of $35 million developing Musha Cay. Also known as the Islands of Copperfield Bay, the cay has been transformed into an exclusive paradise resort destination for up to 24 guests, reportedly costing $37,500 a night.

In addition to a 10,000 sq ft main house, visitors can enjoy the use of an outdoor movie theatre, picnicking on one of 40 pristine beaches, sailing, snorkelling or sunbathing on a two-kilometre sandbar. Sheltered by several surrounding islands and away from the prying eyes of the public, the resort has also hosted several high-profile weddings including those of Penelope Cruz and Javier Bardem, and Google co-founder Sergey Brin.

Exuma: The Hamptons of The Bahamas
While The Bahamas archipelago is spread out over more than 5,000 sq mi, it appears that the glitterati have honed in on the Exumas as their private island “neighbourhood” of choice. Entertainment magazine The Hollywood Reporter christened the Exumas as a “veritable Hamptons of The Bahamas” where, “everyone from Johnny Depp to Bernard Arnault, CEO of luxury goods conglomerate LVMH Moet Hennessey, is an owner there.”

Other celebrities who own property in the Exumas include country music stars Faith Hill and Tim McGraw, who purchased 17-acre Goat Cay in 2006; director, actor and screenwriter Tyler Perry, who bought 20-acre White Bay Cay in 2009 for $6.4 million and business magnate Prince Aga Khan IV, who spent up to $100 million for 349-acre Bell Island, also in 2009.

According to The Bahamas Ministry of Tourism, the Exumas is an archipelago of about 365 islands and cays, which means there is plenty of paradise to go around. “Exuma is the most popular choice, because there are more [islands] for a start,” explains Mike Lightbourn of Coldwell Banker Lightbourn Realty. “Most people concede [Exuma] is probably one of the most attractive parts of The Bahamas.”

Things to consider
Although owning a private island is a must-do for many top celebrities, there are a few things to be considered before signing on the dotted line.

“Accessibility is a big part of what people should consider,” says John Christie, vice-president of marketing for H G Christie Ltd real estate. “For instance, there are some islands in the northern Abacos that are very inexpensive per acre–the reason why is because they are a lot less accessible. If you buy an island that is inaccessible to get anything there and you’re shipping everything in on barges, it will cost much more.”

Christie adds that people searching for privacy may desire a remotely located island, but may not be practical in the long run.

“Most people when buying their own island may want to feel like they’re remote, but they may also want to go to a restaurant in their boat, or be able to fly in reasonably nearby without having to use a helicopter all the time.”
Lightbourn agrees that location plays a main factor in determining which island to purchase.

“People need to decide what their priorities are in owning their island,” he says. “If they want complete privacy, then they need to be a little more remote, which means they won’t have, probably, nearby settlements to go to to shop, enjoy some nightlife or go to a good restaurant.”

Another factor to take into consideration is whether or not the island is exposed to the elements, especially if you have to rely on a boat as the main mode of transportation and for supplies.

“If you decide on an island that is not protected at all, then when the weather gets up, you’ll always be worried about your boat,” says Christie. “You will need a place where you can cut into the island and create a sheltered marina.”

Island preservation
Many of The Bahamas’ islands are also located near designated national parks or “no-take” areas which limit development to preserve marine habitats, which is another element celebrities and ultra-high-net-worth individuals need to consider.

“If you’re buying an island in a no-take zone, you would be able to build a regular residence or smaller personal buildings, but you wouldn’t be allowed to do any major development such as a large hotel or similar project,” says Christie.

In terms of development, large or small, building infrastructure can also be costly; every material from nails and screws to wood and concrete must be imported from the mainland.

Buyers should also be mindful of the island’s physical attributes and whether it can sustain a residential development.

“Whether it has great elevations, deep water access and beautiful beaches, that’s what celebrities or what anyone looks for in an island,” says Christie. “Believe it or not, coconut trees add significant value to an island. It’s what people dream of when they think of a private island. In their mind they see coconut trees and a beautiful beach. If there’s no coconut trees on the island, people will plant them.”

Above and beyond coconut trees and beautiful beaches, however, celebrities covet the peace, privacy and tranquillity that come with owning a private island. Although it can cost several millions of dollars to find the right spot, to many it is money well spent.

In an interview with talk-show host David Letterman, Johnny Depp noted: “It’s the one place we can take the kiddies to the beach without a bunch of lenses coming out.”