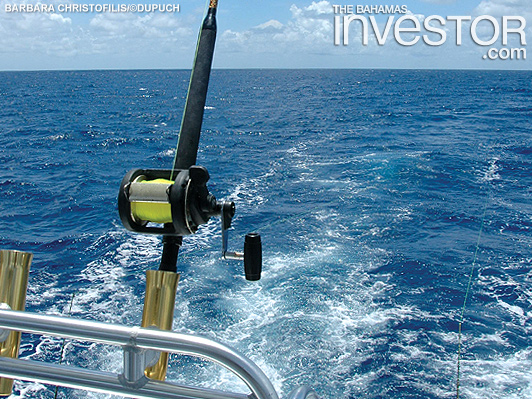 Each year, around 20 sportfishing tournaments take place in The Bahamas. Drawn by the archipelago’s clear waters and plentiful pelagic fish, anglers flock to the country injecting money into the resorts, marinas and charter firms that have sprung up around the industry. This year, The Bahamas’ largest billfish tournament, the Bahamas Billfish Championship (BBC), celebrates its 40th anniversary—a milestone that not only speaks to the enduring popularity of the sport, but also reflects the country’s long history of skilled and competitive fishing. Sportfishing is not new to The Bahamas. The country is well known for breaking records and luring world-class anglers to its waters.

Legendary sportfisherman, and inductee of the International Game Fish Association (IGFA’s) Hall of Fame, S Kip Farrington made history in 1933 when he landed Bimini’s first recorded blue marlin. An associate editor of Field and Stream magazine, Farrington wrote articles praising Bimini’s waters and attracted the attention of other keen anglers, such as Ernest Hemingway, who came to Bimini in 1935 and is credited with landing the island’s first unmutilated bluefin tuna.

Bimini’s reputation as the unofficial fishing headquarters of the islands was cemented in 1955 when the Bimini Big Game Club Resort & Marina opened its doors and began hosting international tournaments. Many of the records set during Bimini’s boom time remain unbroken today.

Prime location
“The fishing is good in The Bahamas,” says Basil Goulandris (pictured, above), organizer of the annual Lyford Cay Offshore Tournament. “That is partly to do with the geographical location. We are on a migratory pathway, so you know the fish are going to be here.”

Thanks to their position in the warm waters of the gulfstream, the islands of the Bahamian archipelago are passed by hundreds of migrating fish making their way along the current. More than 50 sportfishing records have been broken in Bimini and several high-profile tournaments take place there every year, from the Bahamas Wahoo Smackdown in November to the Billfish Bonanza in May.

Abaco is also a popular haunt for fishermen. In 2011, the team of the Double Dog broke the Bahamas blue marlin record when they pulled in a 1,119 lbs fish after a three hour battle off Treasure Cay.

Goulandris also rates the waters north of Harbour Island and Spanish Wells as a good spot for tuna, and north Andros for dolphin.

Sportfishing in The Bahamas typically focuses on seven species. The billfish species of blue marlin, white marlin and sailfish are found in deep waters, far from shore and attract international anglers ready for a challenge. When caught in a tournament, billfish are usually released back in the water, as their populations are not stable enough for intensive fishing. The more sustainable wahoo, dolphin, tuna and kingfish do not have to be released, although the Department of Fisheries does set limits on how many an angler can catch.

The BBC
The Bahamas Billfish Championship (BBC) celebrates its 40th anniversary this year and is the oldest billfish tournament series in the world. The BBC runs from April to June and encompasses four tournaments, which take place throughout the archipelago. Anglers are allotted points, depending on their performance in each tournament, and these are totalled to determine the overall champion. When the BBC began in 1973, 15 boats signed up. Last year almost 50 registered. At the height of its popularity, BBC president Al Behrendt says the tournament saw 86 boats compete.

The entry fee for the BBC is $3,000 in advance for each tournament or $3,500 if you are paying less than 30 days before it starts. The anglers compete for trophies and merchandise prizes that are awarded at each tournament. For the overall top three finishing teams, there are bronze trophies and merchandise prizes. For the overall champion, there is a BBC Championship ring that “rivals” the Super Bowl ring, according to Behrendt. It is made and presented by Abaco Gold of Marsh Harbour.

While the BBC does not “officially” award prize money, adds the president, that is not to say that there “isn’t some friendly wagering that takes place amongst the anglers.”

Accommodating anglers
With anglers coming from around the world to test their skills in Bahamian waters, Behrendt says the biggest challenge is finding somewhere to put them. “When the tournaments are that big the number of facilities able to accommodate that many boats is very limited,” he says. “That is the biggest challenge—not only hosting the boats, but also being able to feed the people and provide the services they need.

“Some of the most intriguing areas to fish are not readily accessible; they do not have nearby marinas, so they are not conducive to having a
fishing tournament.”

This year, the BBC comprised of tournaments in Treasure Cay, Guana Cay, Harbour Island and Marsh Harbour where the final leg of the series took place. The event is funded through sponsors and entry fees.

According to estimates from the BBC drawn up in the early 2000s, the tournament contributes around $4 million a year to the local economy. It also serves to raise the country’s profile in the highly competitive tourism sector, and bolsters its reputation as a sportfishing Mecca.

For four decades the championship has attracted competitors from the US, Canada and the UK; many of whom have developed a real camaraderie, according to Behrendt, who has been involved in the tournament since its inception.

“The fraternity that has developed over the years has been very interesting to watch. People that met at the tournaments went on to have business ventures together and we have had marriages dissolve and marriages created.

“It has been an interesting 40 years.”

A tournament for locals
As founder of the Lyford Cay Offshore Tournament, which is in its 15th year, Goulandris says he also enjoys tournaments for the social aspect, as much as the fishing. “It is an opportunity to trade stories, tips, ideas and fishing technique,” he says. “It is a fun event.”

The Lyford Cay tournament runs for two days and takes place at the end of April, start of May. It has no sponsors and relies on entrance fees for funding. Participants are not limited to billfish, but, in adherence to IGFA standards, there are restrictions on how the fish are caught and brought into the boat. Billfish must be released and all other species are limited to 15 of each per angler.

Last year, the Lyford Cay tourney welcomed 20 boats, most of which were local fishermen. Goulandris says he established the event specifically for the Bahamian community, which he feels was sometimes discouraged by the scale of the larger international tournaments. “Fifteen years ago there were the big money tournaments attracting all the US boats,” he says. “The locals were not participating, because we did not have the skill set, or the knowledge or, perhaps, the money. I saw a need for the locals to have their own tournament and compete amongst themselves.”

Once in a lifetime
Goulandris and his team on the Zephyros—named after the Greek God of the west wind—prefer to troll for wahoo, dolphin or tuna rather than billfish.

“Going out for billfish is not as enjoyable,” he says. “You can be out there for ten hours and not catch a thing because there are so few. Those are the truly hardcore fishermen who can do that for days in a row. When targeting dolphin or tuna there is a bit more action.”

For the tenacious fisherman who manages to get a billfish on the hook however, Goulandris acknowledges that the thrill is incomparable. “The fight is spectacular,” he says. “Watching a billfish jump and fly through the air and challenge you while you are reeling in the line is exhausting, but very rewarding and very satisfying. It is almost a once in a lifetime thing.”

While many in The Bahamas are keen fishermen, Goulandris is quick to highlight the differences between the hobbyists and tournament participants, saying: “In a tournament it is a highly skilled sport. It takes experience and knowledge.
“Anyone can catch a fish, but when it comes to a tournament you are out there and you really have to catch a fish.”