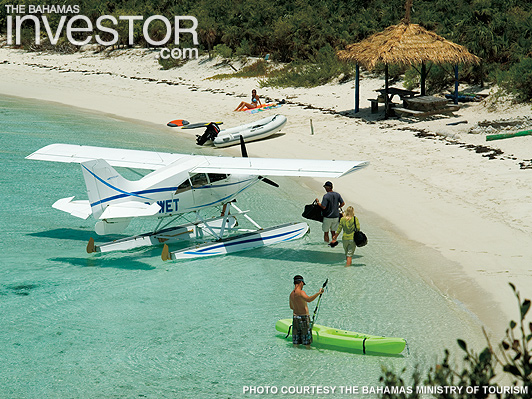 The hypnotic seascapes, mesmerizing horizons and affable personalities of The Bahamas and its people have underpinned the country’s dominance as a vacation destination in the global market for more than 50 years. The recent international economic crisis, however, has forced even jurisdictions with the most robust tourist models to re-evaluate their strategies.

A multi-faceted strategic plan initiated by the Bahamas Ministry of Tourism could be the key to the sector’s sustainability moving forward. That plan transcends traditional marketing approaches, embracing new media, redefining the role for the national flag carrier and leveraging human capital to drive innovation.

“We have been very comfortable accepting tourism for minimal growth,” says Minister of Tourism Obie Wilchcombe (pictured), who was re-appointed to the Cabinet position shortly after the Progressive Liberal Party was swept to power in the May 7, 2012, general elections. “We are trying to ratchet up the temperature. We are trying to make sure we have year-round tourism, not just from January to September. We want January to December, every year, to bring more business.”

Market share
The global tourism market is still worth fighting for. In 2012, international tourism arrivals surpassed one billion for the first time in history and in the Americas, which includes the Caribbean region, there was an increase of six million more tourism arrivals, according to a United Nations World Tourism Organization (UNWTO) report. A total of 5.9 million visitors alone visited The Bahamas last year. A golden goose, the tourism industry remains the engine that drives the country’s economy and is the primary source of revenue generation. Air arrivals have rebounded and were up by more than six per cent in the first 11 months of 2012, building on growth of almost five per cent in the previous year.

Wilchcombe asserts that The Bahamas has a supreme brand. Its archipelagic beauty and close proximity to Florida–a market just half an hour away from Nassau–gives it a distinct advantage. However, there is an acknowledged need to boost both available hotel room inventory and airlift capacity over the next three years.

The $3.5-billion Baha Mar Resort under construction on Cable Beach will create more than 2,200 new rooms, increasing total room capacity by about 15–20 per cent.

To cater to this, the Ministry of Tourism is aggressively pursuing commitments from both new and legacy air carriers to increase airlift to The Bahamas from markets along the Eastern Seaboard of the US, as well as markets further afield in Canada, China and Latin America.

Planning ahead
A well thought out plan for future development has to reflect the present economic and tourism environment. Although robust, The Bahamas’ tourism industry is still vulnerable to factors that are beyond its control such as a weakening of the US economy, a prolonged increase in oil prices and large-scale natural disasters.

The International Monetary Fund (IMF) reported in its Financial Sector Stability Assessment on The Bahamas, released in April, that broadening tourism-related activities in order to foster linkages across sectors is key to sustained economic growth. The IMF projects that in the medium term, the economy of The Bahamas will expand by two to three per cent, broadly in line with that of the US.

Wilchcombe wants to get more visitors on the ground in New Providence and the Family Islands, and spending more to help boost this projection.

“I want to get that spend up to the point where we go from $2.06 billion to about $4 billion, because the country needs economic growth of about five to six per cent,” he says. “And then to help the spend, we have to get more linkages. When I met with the cruise lines, I spoke to them about linkages. How can we sell more Bahamian products to the cruise lines? The more spending [by cruise passengers onshore], the more money stays in the country, the more we can help the economy grow.”

Wilchcombe envisions that growth will eventually manifest throughout the country; from the native charm and simplicity of quaint Family Island settlements to the more upbeat and traditional brand of Nassau and Paradise Island. Adding more diverse restaurant options, improving and enhancing the aesthetics of the capital city and expanding opportunities for visitors to connect with Bahamian culture are priorities for the Ministry of Tourism.

New media
Along with traditional promotional routes such as television commercials and billboard ads, the government has launched a new digital platform–an interactive, web-based solution that allows visitors to survey the distinct tourism offerings of each island in the archipelago and book vacations. The platform gives The Bahamas an unprecedented reach and Wilchcombe hopes it will become a crucial conduit for progress.

Resources are also being directed toward social media to increase the exposure and reach of the islands to a broader audience. In fact, the ministry is hiring key personnel to bolster capacity in this area. The same level of attention is being given to marketing and promotion in foreign language markets including Latin America, China and Portugal, with Wilchcombe indicating that “we have to go after everyone.”

Finding funding
All this will cost money, and although Wilchcombe says he hopes for a larger budget for his ministry in the next fiscal year, he also realizes that joint ventures and co-branding opportunities could reap significant benefits for the tourism product.

Through this, the Tourism Minister is determined to develop a long-term, documented model of sustainability that generates a return on investment for each island. “We are still going to need foreign direct investment coming into The Bahamas. Whilst we have many investors that will show up with ideas, The Bahamas needs to also have its own plan where we go in and invite foreign investors to joint venture with Bahamians or with the government,” he says. “I believe that what we must have is a structured plan for economic growth and development, knowing what each island requires, and then strategically going out and causing it to happen.”

In the short term, and as a result of a restructuring that is underway at the Ministry of Tourism, offshore tourism offices that were shut down under the previous administration in Atlanta, GA and New York, NY will be re-opened. Tourism agents have also been selected in Washington, DC and Houston, TX and the ministry’s office in Plantation, FL, will serve as the hub of overseas operations.

Aggressive new measures will also include new legislation and changes in human resources that will impact the second-home market and hotel licensing, as well as a reformation of the global communications, cruise and airlift divisions of the ministry.

“We are writing a long-term plan that will take us into 2014-15. I want to put in place a plan that allows for sustainability and defines what sustainability is. It is a perfection of the product. It is a perfection of the people. Once we are able to do that and return culture to our experience, whether its music or culinary skills, I think we will have a Bahamas that no one can match.”