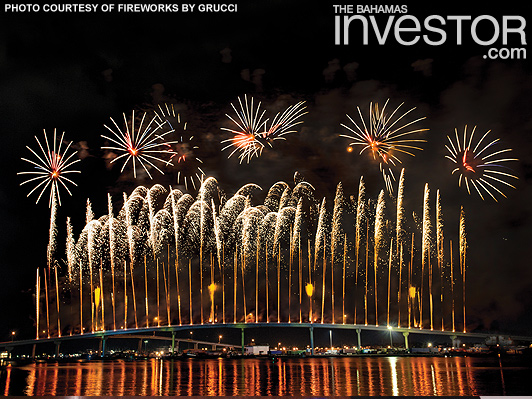 The night of July 10, 1973, saw the newly formed sovereign nation of The Bahamas take its first steps away from its colonial past and forge a new independent path; a path of social and economic change. Four decades on from that historic day, the nation maintains a stable democracy and has the highest per capita income in the region. The path to success, however, was never entirely smooth.

The seeds for economic development were sown prior to independence, when the country was still under British rule. With limited resources, The Bahamas recognized early on that it had to specialize in specific sectors in order to grow its economy: namely tourism and financial services.

“Tourism was structured in the early 1950s under the leadership of Stafford Sands. He created tourism and financial services as the two pillars of our economy and the model we adopted turned out to be hugely successful,” says J Barrie Farrington, a retired hotelier with 40 years experience in the hospitality industry. “We were far ahead of the Caribbean islands and Mexico.”

The advent of independence marked a new chapter in the further development of these sectors and their success would determine the economic fortunes of the country.

Building on the past
In tourism and real estate, the newly independent nation had a sound basis upon which to build. Promotional efforts in the early 1900s had brought tourists to The Bahamas and New Providence was already home to world-renowned resorts such as the British Colonial Hotel. Furthermore, from as early as the 1930s, realtors had been selling properties to well-heeled foreign investors looking to establish a base in paradise.

While other nations in the region turned to agriculture or mining to raise gross domestic product (GDP) levels, The Bahamas meticulously built a framework to promote its tourism product and support foreign direct investment (FDI) by offering attractive tax and customs duty concessions under the 1949 Hotels Encouragement Act, which also provided a period of exemption from the payment of real property tax.

Independence, however, introduced an element of uncertainty and threatened to derail the burgeoning second-home industry. Led by Lynden Pindling, the Progressive Liberal Party (PLP) came to power in the mid ’60s and started agitating for independence from the UK. “We had the change of government in 1967. No one knew what the new PLP government would do at that time,” recalls Peter Christie, president of H G Christie Ltd, one of the oldest real estate firms in The Bahamas. “In 1974, everyone was leaving. We had a lot of uncertainty.”

In tourism, arrivals stood at around 1.5 million in 1973. Approximately 67 per cent of tourists flew into the country and stayed in hotels. The remaining 33 per cent were cruise visitors. The uncertainty surrounding the political direction of the nation meant that the PLP government had been forced to assume control of some hotels after investors left the country, fearful of what independence would bring.

By the end of the decade, the sector had only marginally grown, with arrivals numbering around 1.7 million. Things were not looking so good for realtors either. In 1981, the government enacted the Immovable Property (Acquisition by Foreign Persons) Act. Essentially, the law regulated the ownership of Bahamian land by foreigners. No foreigner could purchase, transfer, or inherit land in The Bahamas without the government’s approval.

“You had to get a permit to buy anything and the permits were not that easy to get,” recalls Christie. “If you bought property, you had to build within two years. If you didn’t, you paid a penalty of 10 per cent of the value of the property each year. Business was not very good.”

However, fortunes turned as the decade progressed, with a boom in tourism. Prospective investors looked afresh at The Bahamas and new hotels and hundreds of rooms came on stream across the archipelago. Hotel investments for the decade accelerated, totalling more than $700 million. By 1986, cruise travel had exploded in popularity and for the first time cruise ship passengers outnumbered stopover visitors.

Foreign investment opportunities
When the Free National Movement came to power for the first time in 1992, the new government continued to encourage foreign investment in the tourism industry. In the mid ’90s the government shed ownership of six of its eight hotels. Among the sales, SuperClubs purchased the 390-room Ambassador Beach Hotel, turning it into the all-inclusive Breezes resort, while Sandals bought the 175-room Royal Bahamian Hotel.

In 1993, hotels with as little as five rooms became eligible for customs duty exemptions on construction materials. Subsequently, a number of smaller properties came on stream in the Family Islands. The following year, Sun International, which later became Kerzner International, acquired Paradise Island Resorts out of bankruptcy. The company launched a major redevelopment and expansion programme. The result was the 2,300-room Atlantis Paradise Island resort, which included one of the world’s largest man-made marine habitats and one of the Caribbean’s largest casinos.

In 1994, the government passed the International Persons Landholding Act, repealing the Immovable Property Act. The new law facilitated the holding of land by non-Bahamians and by companies under their control. The word got out that The Bahamas was open for business once again.

Evolution of a nation
During the mid to late 2000s, Atlantis, which had become the largest private sector employer, continued to expand its property on Paradise Island. Its success made other investors look at the mega-resort model and in 2011 ground was broken on the $3.5-billion Baha Mar redevelopment of the Cable Beach strip (see pg 58).

“We’ve evolved from a tourism industry which had small, medium and large hotels to a landscape of mega resorts with some [smaller] hotels who feed off the attraction provided by the mega hotels,” says Farrington, who retired earlier this year as senior vice president of administration with Kerzner International Bahamas Ltd.

Farrington, who served as president of the Bahamas Hotel Employers’ Association for 31 years, says the industry’s 15,000-room inventory has stood still over the past four decades. New room inventory growth has been largely wiped out by older inventory or a portion of them, being taken off-line. The 2,000-plus rooms due to come on stream when Baha Mar opens in 2014 will go some way to bolstering growth.

Farrington adds that there is room for growth away from the mega-resort model and outside of the capital city. “The Family Islands represent a golden opportunity for creating a sustainable tourism product,” he says. “It could be separate and different in character from New Providence, Cable Beach and Paradise Island–a renaissance of tourism as we know it. The marketplace is overflowing with appealing attractions, so we have to stay fresh and cutting edge to make it in a fiercely competitiveglobal environment.”

Financial services
As enticing as the sunny climate and natural environs are for tourists and second-home buyers, it is the tax free, financial environment that has been a significant reason why many foreigners have taken up permanent residency in The Bahamas.

In 1960, the House of Assembly passed an act that recognized “it is not in the best interest of the Colony to impose any tax on the income or capital gains of any person, company or corporation.” It was a move that essentially laid the groundwork for the development of a financial services sector.

“The financial services sector started off in a very peculiar way in the sense that very wealthy people who came to visit The Bahamas discovered that we had very lax regulations in banking and financial services and at the same time the countries from which they came, North America and Europe, had very high taxes due to the reconstruction after the Second World War,” says James Smith, former Minister of Finance and former Governor of the Central Bank. “At some point in our history, an accommodation was made with our lawmakers and our high-net-worth visitors to say that if you do business in The Bahamas and managed your wealth in The Bahamas, we could guarantee you no taxes and very relaxed regulations.”

With independence came the need for more internal regulation, however, and The Central Bank of The Bahamas was established June 1, 1974, to run the new nation’s monetary policy and preserve the value of the Bahamian currency, which was introduced in 1966 to replace British sterling.

Along with tourism, the banking and financial sector boosted The Bahamas’ economic conditions throughout the ’80s, spurred by growth in private banking and a lack of income taxes. The jurisdiction was so successful during this period that it became an economic model for the region.

“Many Caribbean countries began to follow this twin model [of tourism and financial services], pushed in part by international agencies like the International Monetary Fund and the World Bank,” says Smith, who now serves as a government advisor.

To stay abreast of the competition, in 1989, the government enacted legislation to permit the establishment of International Business Companies (IBCs), reinforcing the already comprehensive legislation aimed at the private wealth management industry. The act, and its related legislation, gave The Bahamas the ability to attract more business to the jurisdiction. “A Latin American financial crisis resulted in a number of offshore banks (particularly from Brazil) setting up [offices] in The Bahamas,” Smith recalls.

Legislation continued to be updated and in the ’90s the government introduced new laws and upgraded existing legislation with regards to IBCs, foundations, special purpose vehicles (purpose trusts) and trusts.

In June 2000, there was a sea change in international finance and the Organisation for Economic Co-operation and Development (OECD) placed The Bahamas on a blacklist for failing to cooperate in anti-money laundering initiatives. The blacklisting led to new corrective legislation, increased oversight by the regulators, tighter know your customer (KYC) requirements, on-site inspections and a downsizing of the jurisdiction to about 280 licenses from around 400.

The Bahamas has moved swiftly to comply with international regulations and continues to do so. By remaining nimble and flexible, it has managed to realize significant growth in financial services. “We’ve got to remain in the game and it’s constantly changing,” says Smith, who is also the chairman of Colina Financial Advisors Ltd (CFAL), an independent Bahamian investment and advisory firm. “We can certainly survive. We have to get into niche areas.”

The way forward
As the decade gathers pace, development in The Bahamas is riding on a wave of serendipity, backed primarily by FDI. Baha Mar, to be finished at the end of next year, is taking centre stage because of its sheer size and breadth of vision, but alongside the mega-resort’s development are major infrastructural advancements that benefit tourism, the real estate industry, financial services and the Bahamian society in general.

China is providing financing through the Export-Import Bank of China to the tune of $150 million for associated infrastructure works, including the construction of a modern highway connecting the airport with The College of The Bahamas campus, near downtown Nassau. The 30-year loan is at an interest rate of two per cent and is part of China’s pledge to extend more than $5 billion in low-interest loans to countries in the Caribbean region.

“Between Baha Mar, the new airport development and the road works you are looking at 90 per cent of the construction that’s going on in the country,” commented Bahamas Realty chief executive officer Larry Roberts at the recent NAI Global Regional Conference held in Nassau. “These three things are really the catalyst that is going to grow the economy and let’s hope developers will piggyback on the development that is going on. We are already beginning to see some of that.”

With four decades of growth and development behind it, The Bahamas is looking to continued economic growth and greater prosperity as it celebrates this 40th year of independence.