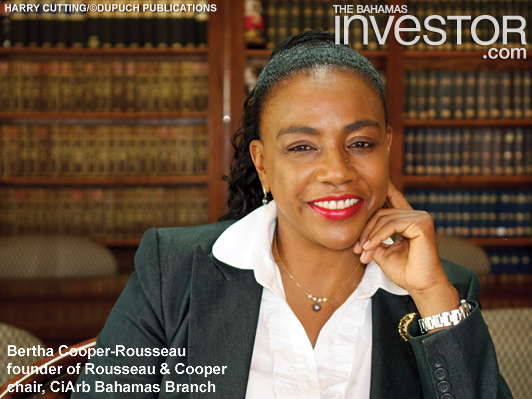 For the last decade, the founder of Rousseau & Cooper in Nassau, Bertha Cooper-Rousseau, has been on a mission: to make her native Bahamas an international arbitration hub. It is an objective that has taken her around the world, from Canada to the US to India, giving lectures and seminars in her capacity as chair of The Bahamas’ Branch of the Chartered Institute of Arbitrators (CIArb).

However, Cooper-Rousseau did not intend to pursue a career in arbitration. “My initial ambition was to become a career diplomat in an international organization,” she says. She originally studied International Relations at L’Institut d’Etude des Relations Internationales in Paris, France. Later, Cooper-Rousseau studied maritime law and worked at the Maritime Division of The Bahamas High Commission in London. She completed her legal training with an LLB from the University of London in 1991, and was called to the bar in both the UK and The Bahamas two years later. In 1999, she founded her law firm, specializing in commercial and business law. It was upon her return to The Bahamas, however, that Cooper-Rousseau realized there was “a huge backlog of cases inhibiting the growth and development of many sectors.”

She shared these concerns with her former pupil master and international UK barrister James Dingemans, QC of Chambers of James Dingemans, QC, who suggested that one way to ease the backlog that plagues the judicial system was alternative dispute resolution (ADR).

Encouraged by her mentor, Cooper-Rousseau began to examine the possibility of incorporating more ADR into The Bahamas’ professional sector. In 2009, she founded The Bahamas chapter of the Caribbean Branch of CIArb. Two years after that the chapter became a branch, giving it the flexibility and autonomy to introduce training programmes in line with The Bahamas’ specific needs and challenges. She has also been designated by the government of The Bahamas to serve as arbitrator and conciliator of the International Centre for Settlement of Investment Disputes (ICSID) of the World Bank in Washington, DC and she was selected by the CARIFORUM-EU Economic Partnership Agreement as one of the five CARIFORUM nationals to serve as arbitrator.

Arbitration potential
The CIArb training initiatives, along with revised legislation and an increased emphasis on building local expertise are the key elements that Cooper-Rousseau believes will help The Bahamas realize its potential as an arbitration centre.

Litigation can be a costly business. With court proceedings eating up both time and money, more and more people are turning to arbitration to resolve their disputes. This type of mediation is typically quicker, less expensive and more flexible—allowing for the parties to reach their own customized settlement and take their dispute anywhere in the world.

According to research from the School of International Arbitration at Queen Mary University in London, around 5,000 disputes opted for arbitration in 1992. In 2011, that figure had climbed to 12,000 with banks, insurance companies and telecommunications firms the most likely to arbitrate.

The FTI Journal—a digital publication from FTI Consulting, Inc (NYSE: FCN)—reported that new claims filed at the London Court of International Arbitration (LCIA) increased by 55 per cent between 2007 and 2008, and again by more than 14 per cent in 2009 to 243 cases. Statistics from France, Switzerland and Dubai tell a similar story.

Carving out a share of that growing international market is a long-term process, according to Cooper-Rousseau, who adds that the CIArb branch and government are committed to working together to ensure The Bahamas becomes a leading centre of arbitration for the Caribbean and Latin America.

Training and education
As chair of the CIArb’s Bahamas branch, Cooper-Rousseau feels that training is paramount. Since 2010, almost 100 professionals have participated in the branch’s courses with a success rate of 90 per cent. “We cannot do anything without education and training,” she says. “You can build the most exquisite arbitration centre, but we still need Bahamians to be trained to run it.”

To ensure both parties involved in a dispute are on an even footing, arbitration generally takes place in a neutral venue. Choosing the ideal location rests on two key factors: the location or “seat” of the arbitration, and the legal framework. There must be good physical infrastructure, accessibility, means of transport and a pool of trained professionals available. Even though participants can bring in foreign counsel, disputes may still go before the Bahamian Supreme Court and the CIArb branch chair says Bahamian litigators need to be prepared.

“The legal profession must increase its exposure to financial services products and training to sustain an influx of complex international legal disputes in this and other specialized areas,” she says.

Earlier this year, Cooper-Rousseau attended the Willem C Vis International Commercial Arbitration Moot in Vienna, which gives students from universities all over the world the chance to participate in a mock arbitration or “moot.” The Bahamas only observed, but Cooper-Rousseau says it was a learning experience to see this type of training in action and she now plans to stage a similar event in The Bahamas in early 2014.

“We want to help young lawyers, to prepare them along the pathway of becoming international arbitrators. Next year will be our first moot,”
she says. “It is going to be groundbreaking.”

The moot is part of the CIArb branch’s new training agenda, which was launched in March 2013. The programme aims to turn participating professionals into internationally recognized and accredited arbitrators within the next five years. In addition to the moot, the branch is launching a mentoring programme open to members aged 40 and under who want guidance from a senior practitioner.

It will also begin offering a continual professional development course specifically designed to keep members who may not be in a profession that frequently
encounters ADRs up to date on all arbitration issues.

“This is to ensure that, once professionals acquire training in arbitration, they stay current on global matters affecting their area of expertise,” says Cooper-Rousseau.

Maritime issues
One sector that is particularly suited to arbitration is the maritime industry, which has a long history of employing ADRs to resolve issues. The Bahamas has the third largest shipping registry in the world, with more than 1,500 registered vessels. The CIArb branch wants to develop an arbitration industry to service that market.

“Every 24 hours numerous tankers, cruise, cargo and other ships navigate through The Bahamas enroute to the US and other countries within the emerging markets,” says Cooper-Rousseau. “Maritime arbitration is therefore a logical progression for The Bahamas. In particular there is potential for Grand Bahama to become a maritime arbitration hub, which would play hand in hand with The Grand Bahama Port Authority’s vision for it to become a major shipping pivot and international business centre.”

The prestigious London Maritime Arbitrators Association (LMAA) recently committed to establishing a Bahamas Panel, which will discuss issues specific to the country.

Industry partnerships
“These are exciting times for the development of arbitration in The Bahamas, particularly as the partnership between the policymakers, judiciary and professionals begins to take shape,” says Cooper-Rousseau, who believes The Bahamas also needs to address its legislative framework before it can become a world-renowned arbitration provider.

“We have to revise the present legislation. We have to make it much more attractive to accommodate both the common law and civil law,” she says.

Arbitration in The Bahamas is currently governed by two statutes—the Arbitration Act and the Arbitration (Foreign Arbitral Awards) Act—which came into force in 2010 and, like all Bahamian laws, are based on the English common law tradition. In order to become more competitive internationally, Cooper-Rousseau wants to see the legislative framework amended to incorporate the civil law system, which is followed by most Latin American countries, as well as many European nations.

Cooper-Rousseau would also like to see government waive the requirement for all international arbitrators to obtain a work permit to practice in The Bahamas, saying: “The key is to remove all red tape that hinders the business efficacy of arbitration.”

In early 2013, the government announced that it would form an Arbitration Council, comprised of nine members. These members include representatives from the Bahamas branch of the CIArb, the Bahamas Financial Services Board, the Grand Bahama Port Authority and the Bahamas Maritime Authority. The council meets monthly, or as required, and will focus on a national development plan to address such issues as legislative changes, implementing the necessary infrastructure and breaking ground for a state-of-the-art arbitration venue.

Work ahead
Cooper-Rousseau’s immediate priorities as CIArb branch chair include overseeing the implementation of the group’s training agenda, spreading the word about The Bahamas’ potential for arbitration through international forums and conferences, and aligning the branch’s strategy with the national development plan drawn up by the Arbitration Council.

She will also be launching the Dame Joan Sawyer Lecture in International Commercial Arbitration in September this year in recognition of Dame Joan, who was appointed first patron of the CIArb Bahamas Branch in March. Dame Joan was the first woman to serve as Chief Justice and president of the Court of Appeal of The Bahamas.

There will be a series of lectures, as well as roundtable discussions especially for the younger members of the branch, which will be “the highlight of the branch’s social calendar,” according to Cooper-Rousseau.
Although there is much work ahead, Cooper-Rousseau is eager for the challenge. She is particularly optimistic about the future of arbitration in The Bahamas given the level of cooperation between professionals and policymakers.

“Since the inception of CIArb in The Bahamas, there has been consistent and collaborative support from policymakers,” she says. “They recognize that international trade and investment are of critical importance for economic development and that The Bahamas is an ideal environment to resolve disputes arising from cross-border transactions.

“This powerful partnership must be enhanced by a centre that is known around the globe for its neutrality, efficiency and excellent institutional infrastructure that meets all the needs of clients, both domestically and internationally.”

New 007 fund model is causing a stir among wealth planners