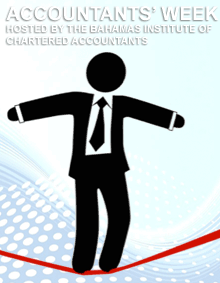 Leading figures from the accounting industry met in Nassau last week to attend presentations and seminars hosted by the Bahamas Institute of Chartered Accountants (BICA).

The four-day event took place at the Sheraton Resort Nassau and speakers tackled issues relevant to the sector such as taxation, trade and national economic strategies for recovery.

Presenters included high-profile government figures, such as Minister of State for Finance Michael Halkitis, who kicked off the conference with an opening address that examined fiscal policy and reform(1), and Minister of Financial Services Ryan Pinder, who praised the role of accountants in an increasingly regulated global environment(2).

Speaking on the last day of the BICA conference, Minister of State for Investment Khaalis Rolle said the government was committed to helping small and medium-sized enterprises(3) receive financial and technical support and also spoke about how investment was transforming Grand Bahama(4). The Minister went on to outline the government’s plans for encouraging greater foreign direct investment(5).

In other sessions, head of HLB Galanis and Co, Philip Galanis, told conference attendees that the government would be reforming its current tax regime(6) as part of its efforts to become a full member of the World Trade Organization by the end of 2014, and chief executive officer and executive director of the Bahamas Financial Services Board Aliya Allen highlighted the importance of branding(7) in promoting The Bahamas as a renowned offshore financial centre.

Break-out seminars throughout the week gave accountants the chance to debate topics such as international taxation, forensic accounting and new products in financial services. During the latter session, Linda D’Aguilar partner at Graham Thompson & Co, spoke of how the new SMART fund model(8) would attract international business.

Also on the agenda was reform of the energy sector(9), with experts calling for greater financing for renewable energy.

One-day conference on the Family Island to be held next week is expected to address topics such as tourism challenges, economic growth and airlift to the island.