Speaking on the final day of Accountants' Week, Minister of State for Investments Khaalis Rolle today said that The Bahamas government will engage in "investment missions" to target new markets. 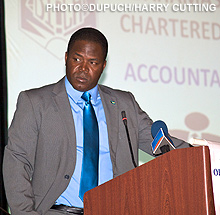 Pursuing foreign direct investment (FDI) is a key priority for the government in developing a national economic strategy, according to Minister of State for Investments Khaalis Rolle.

“An economic development plan for The Bahamas will include a strong commitment to maximizing the returns from FDI,” he said. “FDI will continue to be a major driver of the Bahamian economy for the foreseeable future.”

The Minister acknowledged that competition for investment has grown in recent years, due to the depressed economic climate, and highlighted Jamaica and the Dominican Republic as major competitors.

In order to attract investors, the government will engage in “investment missions” to target new markets, and will consult with the private sector to ensure all areas of the economy benefit.

“The Bahamas will have to be more proactive in seeking out foreign investors. We have to determine where the opportunities are and find the investors that can help us expand those opportunities,” Minister Rolle said.

“We want to get everybody involved, so that we paint a true picture where the opportunities are and so the net benefit is a lot higher than it has been in the past.”

In addition to these steps, the government is looking at ways of making it easier to do business in The Bahamas. “We have to plan a lot better than we have been doing and look at the areas that are bottlenecks,” said the Minister.

These measures are part of the government’s wider national economic development strategy, which Minister Rolle said would be developed with significant input from the private sector. He added that factors such as high energy costs and the country’s reliance on imports would be taken into account, as well as other industry concerns.

The Bahamas and the Dominican Republic are considering establishing a joint business council with members of the private sector of both countries. The council is a proposal of Bahamian Financial Services Minister Ryan Pinder, who said a framework for a Memorandum of Understanding on the idea is expected to be completed by the end of this month.

Jewelry artisan Ria Newbold is launching a range of unique, handmade necklaces and other accessories at the Colonial Hilton in Nassau tomorrow. Watch an interview with Newbold here.