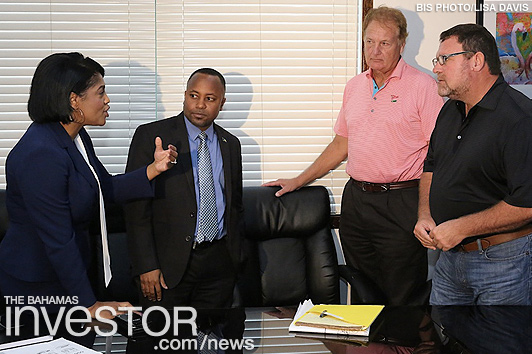 Earlier this week, Minister of State for Grand Bahama Kwasi Thompson hosted investors Philip Ward and Mike Hayhurst, developers of a series of village-styled homes on marina-front lots in Deadman’s Reef that will be known as Seaward Fishing Village.

“We’re pleased to announce that they have already set out to engage local Bahamian contractors and purchase many of the materials locally,” said Minister Thompson.

“We anticipate that this will create a unique community for year-round visitors to Grand Bahama; visitors looking for a getaway with the capacity to dock their boats and enjoy sport-fishing.”

“As Minister of State for Grand Bahama, I am particularly excited that this village will be housed in Deadman’s Reef,” added Minister Thompson. “I am pleased to see on-going development in the Eastern and Western ends of the island, outside of Freeport.”

The project, which originally started in 2003, had to be put on hold due to global recession.

Ward admitted that the project has been a difficult one for the developers, having had to begin the groundwork and then put the project on hold. However, he noted that because Grand Bahama has so much to offer, it made economic sense to complete the project.

“What I always liked about Deadman’s Reef was that I always felt I was in one of the Family Islands, which meant being out in nature, and the ocean, and being surrounded by friendly people,” said Ward.

He noted that although West Grand Bahama offers the “back-to-nature” feel, it is also equipped with the modern amenities that many visitors from the US are accustomed to, such as infrastructure, modern technology, well-equipped hospital and clinics, food stores and great restaurants.

This, he said, is a major selling point for this project and for Grand Bahama on the whole.

Prime Minister Dr Hubert Minnis and a high-level delegation departed January 21 for Austin and Houston, Texas. While in the US, the delegation will meet with local officials and businesspeople to improve investment links. Read a government press statement here.