Aristo Development announced this week it has completed construction on the $30 million luxury residential Thirty Six development on Paradise Island with the first residents taking occupancy.

At the height of construction, Thirty Six accounted for nearly 200 jobs.

According to Aristo Director of Sales & Marketing Matthew Marco, interest in Thirty Six was strong from the start with prices appreciating already.

“Thirty Six is the first new condominium development on Paradise Island in a decade so there was a sense of excitement and a lot of buzz from the start,” said Marco.

“Prices have climbed more than 30 per cent from pre-construction. We are 80 per cent sold.”

“There are Europeans, Americans, Canadians and Bahamians who want a lock and leave lifestyle with all the luxuries of a resort and the comfort of their own private home,” said Marco. “All units also qualify the purchaser for Bahamian Permanent Residency status which has made The Bahamas even more alluring for international buyers.”

Pricing of the final phase of two-bedroom residences ranges from the $800,000’s to over $1.4 million. 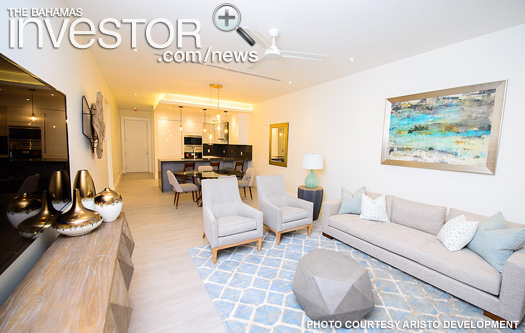 During the first week of June, 30 international incentive travel partners experienced The Bahamas firsthand as they participated in the inaugural Destination Bahamas Meetings, Incentives, Conferences and Events (MICE) Conference hosted at Baha Mar by the Bahamas Ministry of Tourism and Aviation.

The Cabinet Office has announced that the Governor General of the Commonwealth of The Bahamas, Dame Marguerite Pindling, will be stepping down 28 June 2019. She will be replaced by diplomat Cornelius Smith.