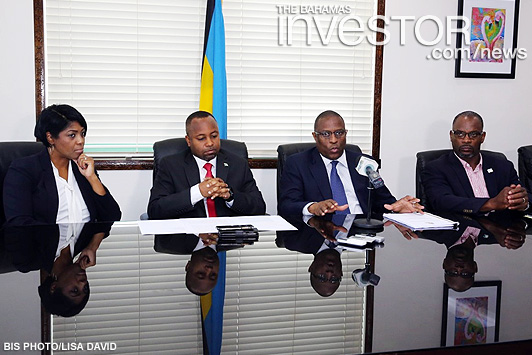 While progress has been made in economically restoring Grand Bahama, there is still a lot of work to be done, said Minister of State for Grand Bahama in the Office of the Prime Minister Kwasi Thompson on the first anniversary of the current Dr Hubert Minnis administration. Pictured: (from left) Parliamentary Secretary of Information and Communication in the Office of the Prime Minister, Pakesia Parker-Edgecombe, MP for West Grand Bahama and Bimini; Minister Thompson; Minister of Youth, Sports and Culture, Michael Pintard, MP for Marco City; and Parliamentary Secretary in the Ministry of Works, Iram Lewis, MP for Central Grand Bahama. (BIS Photo/Lisa Davis)

While progress has been made in economically restoring Grand Bahama, there is still a lot of work to be done, said Minister of State for Grand Bahama in the Office of the Prime Minister Kwasi Thompson on the first anniversary of the current Dr Hubert Minnis administration.

He mentioned youth unemployment and listed some of the programmes designed to focus on this issue, namely: the MSC programme, where 17 Bahamians have been trained to work on MSC cruise ships; the summer job programme, where over 500 young people were employed, being assisted with not only funding but on the job experience as well; and the nursing programme, in which approximately 20 nurses were trained.

Entrepreneurship was another area of focus, in which small businesses were given assistance and provided with financial advisement.

The Business to Business Workshop succeeded in bringing large and small companies together so that all participants could be informed of future and existing opportunities.

The ease of doing business was another area of focus. The Minister said that a report from the Grand Bahama Port Authority (GBPA) indicates that the increase in business applications from January to present, has been more than in the previous eight years.

“That really goes to show that there is a significant increase in the confidence that investors have in Grand Bahama during this period of time.”

An Investment Unit is currently being created, he continued, and regular meetings are being held with the GBPA so that when investors come in, they are walked through the process.

Turning his attention to the tourism market, Minister Thompson said there is an added cruise ship from Bahamas Paradise Cruise Lines coming to Grand Bahama from West Palm Beach daily with the introduction of the Grand Classica, which now joins the Grand Celebration.

Sunwing will provide additional flights to the island and starting this month, through Vacation Express, flights will come from Detroit, Chicago, Nashville, Pittsburgh, Newark, Baltimore, Cincinnati and Dallas. These flights, he added, will bring an additional 16,000 air passengers according to the Ministry of Tourism.

The government is currently negotiating a Heads of Agreement with the new owners.

Minister Thompson added that there were a number of issues that needed to be resolved namely how many employees would be on the property and how many of them would be Bahamian. Other areas included entertainment, concessions that might be granted, subsidies, and the name brand on the property.

“I believe we are in the final stages of that negotiation process and we believe that shortly we should have a signed deal and the renovations will begin shortly. Rest assured, we are committed, all of the members of Parliament are committed that the project moves forward and ensures that we have significant employment levels at that project.”

A new initiative, the technology hub, has also been a main focus. As a result of the summit held in November, as well as creation of the Technology Hub Steering Committee, whose plans have been submitted to Cabinet, a major venture conference which will be held in June of this year.

There were also trips where discussions were held with major technology companies. This, he said, resulted in a major conference that will be held in The Bahamas in 2019, bringing some 1,000 people.

The year ended on a positive note, he added, with the introduction of GIBC Digital, a company that has offices all over the world, and is currently vetting applicants to train and employ in Grand Bahama. They will be spend some $2.5 million on the project and have indicated that their overall investment will be in the area of $50 million.

Another new initiative is the beekeeping programme in which 24 young people were trained in honey production. They have established their companies and produce honey, soaps, and candles, all made from honey in Grand Bahama.

The Minister mentioned existing businesses that have expanded or will be doing so shortly, and major companies from Nassau that will expand to Grand Bahama, including a Bahamian-owned major food store which plans a multi-million dollar development on the island.

Prime Minister Dr Hubert Minnis has extolled the potential of the maritime sector as another way to diversify the economy. He made the observation during the Official Christening Ceremony at Prince George Dock earlier this week of two state-of-the art, $15 million vessels. The tugboats are part of a public/private partnership to improve maritime services.