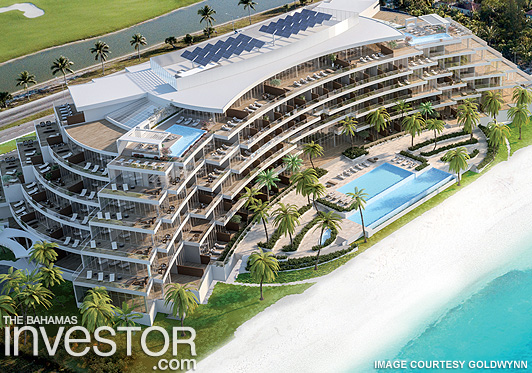 Bahamian real estate firms are anticipating this year to be a banner one, thanks mainly to an influx of new residential developments and a surge of interest by foreign investors in the single-home and holiday rental markets.

According to a five-year study recently released by Engel & Völkers Bahamas, overall residential sales throughout the country have increased by 48 per cent since 2014. The report analysed more than 1,800 residential sales on The Bahamas’ listings and sales database, the Multiple Listing Service.

“The Bahamas’ real estate market generally follows the performance of the US real estate market and has experienced similar growth over the past five years,” says the report. “[The year] 2019 will be a very dynamic year for The Bahamas real estate industry as a number of luxury market condo projects break ground and bring a new volume of contemporary amenity-driven real estate projects to Nassau and Paradise Island.”

The report also states that “foreign direct investment is a critical component to The Bahamas’ growth.” Due to this, the report says that “in October 2018, the International Monetary Fund chose to shave–rather than slash–its gross domestic product growth forecasts for The Bahamas for both 2018 and 2019. It cut its economic expansion prediction for this year from 2.5 per cent to 2.3 per cent, while reducing its 2019 estimate by just 0.1 per cent–from 2.2 per cent.”

The GoldWynn condo-hotel and residences project, a $120 million development by Paul Wynn of The Wynn Group of Companies, is taking shape east of Goodman’s Bay, in the popular Cable Beach area a few miles west of downtown Nassau. Construction on the project commenced July last year and is scheduled to be completed by December 2020.

Prices for the residences range from around $500,000 to more than $4 million. Additionally, buyers can opt in to GoldWynn’s onsite rental programme, where owners can occupy their residence for up to three months per year, while enjoying tax-free rental income for the rest of the year.

When opened, GoldWynn will operate under the Kimpton Hotel and Restaurant brand and be managed by Small Luxury Hotels.

Another condo-hotel project generating interest among real estate investors is One Particular Harbour at The Pointe, located near the British Colonial Hilton along the waterfront in downtown Nassau.

Like the GoldWynn, The Pointe will also offer owners an opportunity to purchase select units as part of its rental programme. Prices for rental residences begin at $350,000.

Across from Nassau on Paradise Island, home of the Atlantis megaresort, the highly anticipated redevelopment of Hurricane Hole began with a groundbreaking in late January this year and the start of vertical construction in February.

The $250 million, 13-acre redevelopment is being undertaken by Sterling Global Financial, which acquired the property from Brookfield Asset Management, Atlantis’s owner, in 2018.

About 250,000 sq ft of the redevelopment has been earmarked for residential use, while 50,000 sq ft will go towards retail, restaurants and office space.

Described by developers as “a city centre for Paradise Island,” the project is being built in three phases. Phase One, known as Sterling Commons, is expected to be completed by June 2020 and will include an upgrade and expansion of the 90-slip marina, construction of 16 residential units, commercial retail, restaurants and offices.

In his address to attendees at the groundbreaking ceremonies of the GoldWynn and Hurricane Hole projects, Prime Minister Dr Hubert Minnis praised foreign investors and the positive impact such developments will have on the Bahamian economy.

“Developments such as this demonstrate that investors continue to value The Bahamas as a world-class destination and an excellent place for investment,” said Prime Minister Minnis. “Over the next many years, the second-home market for Bahamians here at home, in the diaspora, and for non-Bahamians, will experience significant growth.”

Most popular properties
While the new condo-hotel projects and redevelopment of Hurricane Hole are expected to generate a sizeable boost to the capital’s real estate portfolio, there has also been a considerable uptick in sales of existing properties throughout New Providence.

George Damianos, chief executive officer and managing broker of Damianos Sotheby’s International Realty says that: “the most popular sales are taking place within the gated communities, including Sandyport and Old Fort Bay,” with the highest number of sales in the high-networth and ultra-high-net-worth markets at exclusive Lyford Cay and Albany, both found in western New Providence.

Tim Rodland, broker and partner at Better Homes and Gardens Real Estate/MCR Bahamas Group agrees that the bulk of residential sales are taking place in the affluent gated communities on the island’s west end.

According to the Engel & Völkers report, the average sales price of single family homes and luxury properties in Nassau and Paradise Island experienced an increase, 47 per cent since 2014.

Paradise Island’s Ocean Club Estates had the greatest jump, nearly $16 million in 2018 compared with $2 million in 2016. Meanwhile, the average sales price of luxury properties in Lyford Cay, Old Fort Bay, Sandyport and, in the island’s east, Port New Providence, ranged from below $2 million to $4 million plus.

Further afield
However, the boost in residential sales isn’t limited to New Providence. Other areas throughout The Bahamas’ archipelago are seeing an increase in sales activity, particularly the Abacos.

Peter Dupuch, president and broker of ERA Dupuch Real Estate, says Abaco and Eleuthera are the front-runners for high-net-worth sales among the Family Islands, adding “there is a lot of interest for second-home owners in Bimini.”

Meanwhile, Damianos says that Hope Town, Guana Cay, Scotland Cay and Man-O-War Cay are the most popular for sales in the Family Islands. Properties listed in Abaco with Damianos Sotheby’s range from a $4.2 million, six-bedroom, six-bathroom estate in quaint Hope Town to a highly affordable $360,000, three-bedroom, three-bathroom single family home in the tiny picturesque island settlement of Man-O-War Cay.

“In the Family Islands,” says Rodland, “Abaco has shown to be the most popular, representing 70 per cent of Family Island sales in 2018.”

An investor’s market
Investors from the US and Europe continue to make up the bulk of foreign investors looking to purchase real estate, mostly second homes, throughout The Bahamas, according to Dupuch. When seeking investment properties, he says: “Potential buyers are looking for security and amenities. The more amenities, the higher the value of the property. More people are now looking for vacation rentals that they can live in and also rent out when they’re not here. Palm Cay [in eastern New Providence] is very successful in the short-term rental market.”

Damianos has also seen an uptick in investors recognizing the appeal of investing in vacation rental properties. “I don’t think [potential buyers] are looking at properties so much as a residential investment, but a lot of homeowners are taking advantage of the short-term rental opportunities,” he says.

“The rental market has done particularly well,” says Rodland, “as we have seen an influx of demand, especially with expats coming to the island.”

Real estate professionals agree that The Bahamas continues to be an attractive choice for foreign investors looking to purchase property in the Caribbean region for many reasons.

“Climate, its proximity to the US and the fact that it’s a little different, makes The Bahamas the ideal place for real estate investment,” says Damianos. “[The Bahamas’] dollar-based currency is a plus and our beautiful beaches and crystal clear waters are second to none.”

“There are a lot of exciting developments happening in and around The Bahamas, in particular New Providence, which makes The Bahamas a great lifestyle investment–in addition to the tax benefits the country has to offer,” adds Rodland.