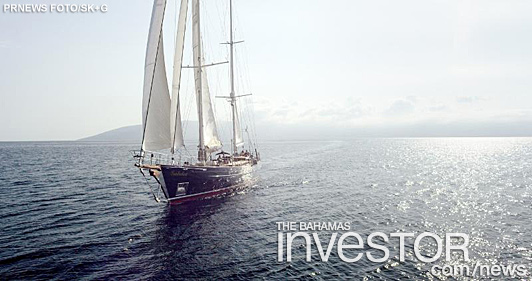 LAS VEGAS, January 2015 /PRNewswire/ — SK+G, the full service marketing agency behind the branding and creative development for the $3.5 billion Baha Mar Resort & Casino in Nassau, The Bahamas, announces the debut of a stylish short film that premiers online today. The online launch is a targeted digital-only campaign, directing audiences to view the full 2-minute version of the immersive film on the updated Baha Mar website, using native advertising, apps, e-mail and social channels. Following the digital campaign, dramatic TV spots will air in the U.S. and Canada in early 2015.

The film, titled “The Voyage,” was filmed in Croatia and The Bahamas, centering on a stylish, worldly couple as they make their way on a special voyage to an unknown destination. Throughout the spot, we see cinematic flashbacks of their well-traveled life together including milestone moments they’ve experienced in Riviera-style locations around the globe – extraordinary moments of arrival, discovery and jubilation. An unexpected twist reveals that a new journey is about to begin for them. This is a story about rejuvenation, revelry and adventure. And it can only happen at a place called The New Riviera. Produced by Emilio Estefan and set to the iconic song “Feeling Good,” performed by Las Vegas headliner, Matt Goss with a 17-piece orchestra, the soundtrack further evokes that special combination of vintage swagger and modern romance.

TV spots will air in both :60 and :30 versions throughout the U.S. including New York, Philadelphia, Miamiand Houston starting February 22, debuting during the broadcast of the Academy Awards.

The film is part of a multi-media, international marketing campaign concepted and executed by SK+G that includes broadcast, print, OOH, digital and experiential event components.

“Baha Mar is a destination of epic proportion and is sure to become one of the great iconic attractions for discerning travelers around the world. With that in mind, we knew we had to introduce the brand in an equally commanding way. This enchanting film does that,” states John Schadler, managing partner at SK+G. “The Voyage is a story of glamour, excitement and the promise of a place that could only be described as ‘The New Riviera’.”

“The Voyage” represents the next chapter revealed in the Baha Mar brand launch, which included extensive teaser print ads in publications including Vanity Fair, Travel + Leisure, Food & Wine and Departures, dominations in high profile transit stations including New York’s Penn and Grand Central, 30th Street Station in Philadelphia and South Station in Boston as well as taxi cabtop advertising in New York, Philadelphia,Boston and Miami during Q4 of 2014.

The coinciding print campaign, “Modern Getaways” was shot by acclaimed photographer Kristian Schuller, whose portfolio includes campaigns for Compari and Neiman Marcus and an array of editorial for publications including Vanity Fair.

During a meeting between Bahamian Prime Minister Perry Christie yesterday, Chinese President Xi Jinping announced an agreement that would allow the trading of residential mortgage-backed securities to take place in The Bahamas.

The first ICONs have now been registered, setting a positive tone for this investment funds product that was launched at the end of 2014 by the Bahamas Financial Services Board and the Ministry of Financial Services.