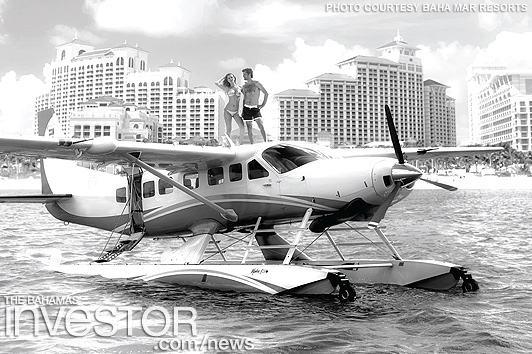 A single destination comprised of three global brands, Baha Mar is hoping that its million-dollar suite of new advertising collateral will catapult it to the top of the list as the hottest tourist destination on the planet.

Baha Mar offers a unique collection of vacation experiences with the Grand Hyatt Baha Mar, SLS Baha Mar and Rosewood Baha Mar each catering for a distinct set of customers. The trio shares the resort campus with a range of amenities, which include an ESPA-branded spa, Jack Nicklaus Gold Club, Peter Burwash International tennis courts, the Baha Mar Casino, a number of pools and beaches, a shopping district and tons of exceptional dining experiences.

Baha Mar’s Life Spectacular campaign takes its name from the destination’s ambition to “elevate real life moments for every guest into something spectacular.” Baha Mar is to showcase “a moment in the sun and everything else under the sun,” according to one of its commercials.

“It’s all about growing the market and not cannibalizing it,” says Graeme Davis, Baha Mar’s president, who is leading the strategic and operational organization of the resort destination.

“We want to grow tourism demand in The Bahamas,” he said, pointing to new airlift set to come on stream out of Chicago and Dallas. “Ultimately, we want to grow into Latin America and Europe. It’s a process that takes time.”

Since its ribbon-cutting in April, Baha Mar has worked to grow its occupancy numbers. Presently, around 50 per cent – a figure that has doubled since June. For the upcoming holiday season that number is expected to jump to around 80 per cent, according to Davis.

The destination has a 3,000-strong workforce that’s expected to grow to 4,000 by the end of the year and hit 5,000 sometime in 2018, according to executives. Meanwhile, 20 of its 40 plus restaurants, bars and lounges have opened.

The resorts digital reach has so far been impressive. Prior to this new campaign the resort destination had over 1.3 million views on its website, more than 531 million impressions (the amount of viewers potentially seeing an ad), 820,000 video views and 50.3 million user interactions on Facebook.

“The campaign is designed to convey how this spectacular multibillion dollar development also feels very personal and real, as if the destination is tailored just for you,” he said.

That’s because the feel of Baha Mar is intimate and the spaces “carefully curated” to deliver “personalized and real” experiences according to Karin Salinas, Baha Mar’s vice president of marketing.

“We needed to communicate that there is no ‘one size fits all’ approach at Baha Mar. Every nuance of the resort from amenities to special experiences and offerings is purposefully created,” she said.

Although there are allocations for traditional media (radio, TV, newspapers and billboards), the lion share of the advertising campaign’s budget is allocated to digital marketing. Baha Mar provided very little details on where exactly the ads are to appear within the North American market. The campaign, however, is slated to run throughout 2018.

With Grand Hyatt recently opened, SLS preparing for its soft opening on November 7, and opening to guests on November 14, Baha Mar is moving towards phase three of the project – the launch of Rosewood in spring 2018, which will bring the destination’s total number of rooms, suites and villas to 2,300.

Dr Beat Nobs, Ambassador of Switzerland to the Commonwealth of The Bahamas recently paid a courtesy call on Minister of Financial Services, Trade & Industry and Immigration Brent Symonette at the Ministry.