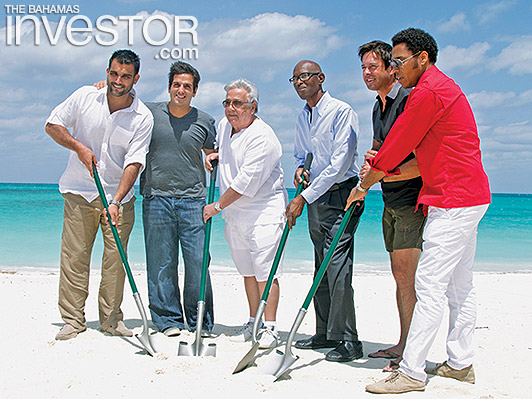 The $250-million Bimini Bay Resort and Marina, a 750-acre oceanfront community located 48 nautical miles off the coast of South Florida, is on the cusp of a tourism renaissance. With its enormous tourism appeal and untapped potential, developers want to take the exclusive North Bimini hideaway to another level of sophistication and service with its next phase–the development of Rockwell Island Beach Estates, a new luxury residential and resort community, comprising 108 family homes starting at $2.5 million.

“We don’t want to be like every other development. Simply putting homes next to

the beach doesn’t work anymore,” says Rafael Reyes, president of RAV Bahamas, a real estate development and construction company. RAV Bahamas is a subsidiary of the Miami-based Capo Group, which constructed the Bimini

Bay development
In order to grow its market share, Reyes says the developer had to become “a little more innovative” to attract an even more sophisticated clientele and turn visitors into homeowners. At Rockwell Island, developers are set to put in place an even higher category of amenities. Homes constructed during this phase will have the beach as their backyards, with private dockage across the street. The man-made island will have a total of 54 slips for its beachfront homes. Construction on the first two homes commenced in March. Developers are expected to begin building another four before year’s end.

This part of the project doesn’t have a marina component, because every single home has its own docking facility,” Reyes explains. “That is a luxury that we have not seen on any other development. I think it separates us [from the competition], making for a much more exclusive, unique, real estate development.

Houses built in this second phase can take one of five styles: Balinese (the largest at 4,927 sq ft); Feng Shui (the smallest at 3,852 sq ft); Moorish; Palladian and Plantation. The homes take eight to 12 months to complete.

The community’s infrastructure is already partly in place, with the Bimini Bay developers opening a new $1.4-million (turnkey) restaurant with indoor and outdoor dining options earlier this year. The eatery seats 175. The developers also recently completed construction on Sakara, a new Mediterranean-style beach club, which reportedly cost of $500,000 to build. The goal is to create a hive of activity and excitement, with more entertainment beachside, increased indoor and outdoor dining options and signature events designed to attract an international high-net-worth following.

Under New Management
The developer of Bimini Bay has had a presence in The Bahamas since 1995, when Miami developer Gerardo Capo, owner of the Capo Group, purchased the Bimini Bay property.

Two years later, Capo gained the proper approval and permits allowing the project to break ground in 1999. The project went vertical in 2003.

In 2008, CNBC International Property Awards, in association with The New York Times, presented Bimini Bay Resort with awards in two categories: Best Development and Best Marina Development in The Bahamas.

In 2011, the Bimini Bay Resort developers felt the time had come to place the resort in the hands of an experienced team of new managers with solid turn-around success. “The family background is more of a real estate background. We built the project originally like a real estate development that turned into a resort style, condo-hotel. It wasn’t our forte,” explains Reyes. “We felt it was time to opt for professional management to assist with the operations and the marketing of the resort.”

According to Leslie Bethel, chief operating officer of RAV Bahamas, it was important to find the right management company. Bethel’s tourism and travel consultancy firm, Notarc Management Group, brokered the deal between the developers and the new management company, RockResorts.

RockResorts, a subsidiary of Vail Resorts Inc (NYSE: MTN), was originally created in 1956 by Laurance Rockefeller, with the development of Caneel Bay on St John in the US Virgin Islands. The brand now includes 27 properties and hotels spanning the western hemisphere in six countries–the United States, The Bahamas, Jamaica, the Dominican Republic, St Lucia and Costa Rica–and six US states: Colorado, California, Nevada, New Mexico, Wyoming and Florida. Vail Resorts is a publicly held company traded on the New York Stock Exchange.

“We’re a mixed-use development on a Family Island. We are not in a traditional drive-through location or a major island destination such as Nassau, or Puerto Rico,” says Bethel. “We needed to find an operator who could be nimble and flexible in our business style.”

With its public track record, customer profile and environmentally friendly background, RockResorts fits the bill. “We have a number of moving pieces in this project: our condo hotel, our real estate component, marinas, amenities, restaurants. Given their experience in a variety of areas, we felt that they were the best operator for us,” says Bethel.

In 2011, the Capo Group handed over management of the vacation complex. RockResorts manages the vacation home and marina facility through its property group, Legendary Lodging, and has big growth plans for the future including the development of a boutique RockResorts hotel, with 80 to 100 rooms, RockResorts branded residences, a RockResorts Spa, additional restaurants, a beach club and an on-site casino for guests managed by a separate third-party group.

Year-Round potential
One of the main objectives of the new management company is to beef up arrivals to the property. Unlike the resorts in most of The Bahamas, the summer months represent Bimini Bay’s peak season. Although the year-round occupancy is currently less than 15 per cent, during summer months the number is much higher, hovering around 60 per cent.

“That’s just from our homeowners and their friends alone. That I think was very interesting to RockResorts. Every other development was busy in the winter,” says Reyes. “We have an open canvas to really increase the revenue in this development, because we would be able to have year-round occupancy.”

With 80 per cent of owners of the 400 units opting to place their accommodations into the rental pool, programme operators see a “tremendous” opportunity for growth. Realizing this potential received a boost in August 2011, when IBC Travel announced it would provide additional airlift capacity of around 1,000 passengers per month into Bimini through the addition of direct daily non-stop flight services from Miami. The expanded flight schedule doubled the number of flights from South Florida to Bimini each week.

Another airline operator, Silver Airways, provides airlift to the island and the new high-speed ferry, Pinar Del Río, is also regarded as a “game changer.” The ferry began a daily service from Fort Lauderdale to Bimini in April. The boat cruises at a speed of 32 knots and makes the trip in just 90 minutes. It can accommodate 450 passengers, along with 80 vehicles. Its amenities include a first-class cabin, mini casino, cafeteria and bar.

With these strengthened transport links and the launch of a targeted marketing campaign, over the next three years Bimini Bay developers hope to see their year-round occupancy rates increase to as much as 45 per cent. “We treat Bimini as an extension of Miami. In fact, we reference Bimini as ‘Miami offshore,’” says Bethel. “We want to tap into that market and allow these people the ability to come to Bimini, whether they come for the day or stay overnight. It’s an untapped market for us to reach. The ferry gives us that ability, in addition to our traditional air travelers.”

Repositioning Bimini
We have the sea, the sand, the sun and the proximity to the South Florida coast. We are the best secret out there today. But we are going to let the secret be known,” says developer Gerardo Capo, who, although a self-described micro-manager, has slowly begun to relinquish his hold on the development, leaving his son Alex, son-in-law Reyes, and COO Bethel to chart its course.

According to Reyes, Bimini Bay differs from other projects, as it markets itself as part of the island, not separate from it. “We don’t consider ourselves an all-inclusive type development,” he says. “We look at the island of Bimini as part of our amenity.”

If you go by the numbers, the development has been good for the island. During peak season the resort employs close to 250 Bahamians. The majority are Biminites, although some employees come from Grand Bahama. Not only is the resort a source of employment, the more visitors it attracts the more money there is to circulate in the local economy.

“Prior to Bimini Bay, the island hosted about 20,000 to 23,000 stopover visitors. It was probably ninth in The Bahamas in terms of visitor arrivals,” says David Johnson, director general in the Ministry of Tourism (MOT). “In 2011, Bimini hosted 53,000 visitors, second only to Abaco in the [Family] Islands.”

Acknowledging that the project has yet to reach its “full maturity,” Johnson says that Bimini has already made “tremendous progress.” However, he is quick to add that the government does not want to change the “feel” of the island. “The growth for Bimini will be stimulated by this project and as it grows, we will improve the infrastructure and the access.”

Bimini Bay is aiming big and is hoping to become more than just another sun, sand and sea destination. Rather, its vision is to become the “The Hamptons” of the Caribbean. Says Reyes: “We are going after that type of market. We feel we can attain it, because we have three very strong qualities: location, location, location.”