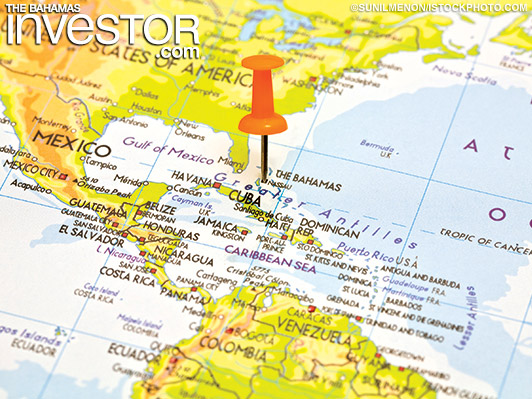 The Bahamas sits on the doorstep of two of the world’s biggest markets: North and Latin America. The region offers unparalleled opportunities in trade, tourism, investment and financial services, and Bahamian organizations, services providers, and the government are all looking at ways to make the most of this potential.

In the United States, The Bahamas already has a sound footing, explains Alex Sokoloff, Political, Economic and Commercial Chief at the US Embassy to The Bahamas. “For the US, the most inviting aspects of The Bahamas, as an investment proposition, is obviously the close proximity, which makes it as easy to get to as Florida is for Americans. The parity with the dollar also makes it very easy to move currency back and forth between the two economies.”

Sokoloff also cites the political stability of the country, and the fact that the two countries are in the same time zone and share a common language, as being big positives for investment. “From a US investor’s point of view, a lot of the big hurdles as regards to investing in a foreign country aren’t present in The Bahamas, as it is close to us culturally and geographically.”

LATAM wealth management
As for Latin America (LATAM), foreign direct investment (FDI) from the US, and more recently China, far outweighs any inflow of capital from The Bahamas’ southern neighbours, but the jurisdiction’s appeal in the region is on the increase. The Bahamas is within easy reach for Latin American tourists and investors, with regular daily flights from major cities and is in the same time zone as most of the region.

However, The Bahamas’ real strength is its legislative framework, which allows the formation of certain financial instruments, such as hedge funds, equity funds and SMART funds, that are particularly attractive to the growing number of high-net-worth individuals (HNWIs) in Latin America. Among LATAM’s wealthy, hedge funds have traditionally clearly dominated alternative investment holdings and accounted for 35 per cent of all such holdings in 2010.

Michelle Neville-Clarke, partner with Lennox Paton in the law firm’s banking and finance, corporate and commercial, investment funds, and private client groups, says that opportunities in fund management from Latin America are on the rise, particularly using the flexible SMART Fund model.

“It has become apparent, over the last few years, that there was less and less interest in the boilerplate type of Standard Fund. People have begun to tailor make their funds. Investors have started seeking out products to suit their private arrangements, but they still want them in a supervised environment. More and more you hear wealth managers who deal with Latin American clients saying that the one-size-fits-all solution does not suit them; they want something that is tailored to meet their needs.”

US trade
In North America, the investment model is entirely different. Traditionally, there has not been much bilateral activity with the US in the realm of wealth management. However, in trade, real estate and tourism, the US is by far The Bahamas’ most important overseas market. The Bahamas is home to approximately 30,000 American residents, with around 110 US-related businesses based in the country. In 2008, 85 per cent of the 4.6 million tourists visiting the jurisdiction were American, according to the US Central Intelligence Agency.

Sokoloff believes that for investment to grow further, the focus of efforts should be on alternative energy and the potential that has for improving the economic environment. “The Bahamas has a power system that is essentially based on diesel generators, which were probably a good choice when they were built, but now they can be costly, unreliable and polluting,” he says. “This can present a challenge to US investors, because energy costs can be high. If you can bring down the energy overheads, you will increase investment and employment in the jurisdiction.”

In the US, alternative energies have to be heavily subsidized because of the ready supplies of fossil fuels and natural gas, which keep the cost of energy down at around 5-6 cents per kilowatt hour (kWh). In The Bahamas, where energy already costs around 38 cents per kWh, renewable or green alternatives are much more viable.

“I look at these investments from a businessman’s point of view,” continues Sokoloff. “If it is going to be successful, it has to be commercially viable and better than what is currently in place. There are many alternative energy options available, such as ocean thermal technology, solar, wave and wind power, and some are more commercially viable than others. The Bahamas has an advantage when approaching alternative energy, because the base costs of energy are already so much higher.”

This could make it a world leader in this field, according to Erica Thibault, Public Affairs Officer at the US Embassy. “There is a tremendous opportunity for The Bahamas to be a showcase for the world when it comes to alternative energy and collaborating regionally. It could be a model of how renewable, sustainable solutions can work.”

To help make this happen, the US Embassy has been encouraging trade missions to The Bahamas and participation by US firms in national and regional energy forums. So far, efforts have been concentrated on fuel cell technology, with the embassy bringing US companies such as Bloom Energy, which supplies such Fortune 500 companies as Walmart, Google and AT&T, to The Bahamas to look at investment opportunities. “Originally, Bloom Energy had no interest in expanding into overseas markets, but after coming to The Bahamas, they saw there was an excellent value proposition in terms of the return on investment,” explains Sokoloff.

As for financing, both the Ex-Im Bank of the US and the Inter-American Bank (IDB) are providing funds for Bahamian companies looking to innovate or invest in green technologies. “Investing in renewable energy is a triple win: it addresses climate change; it utilizes new technology; and improves the investment climate by reducing the cost of running a business here, thereby providing an infrastructure for greater investment and employment and to encourage more trade.”

Moreover, there are other areas with potential for increased investment from the US, says Sokoloff, such as ecotourism, care-assisted living, the second-home market and medical tourism. “The Bahamas is strategically located and we have to look at what it has to offer and how we can leverage that to diversify investment and get new investment, because with that comes much more employment and much better quality employment.”

Gaining market share
Recognizing the potential for markets in the Americas, the Bahamas government and key industry players and organizations have launched campaigns to promote the jurisdiction as a place in which to invest.

For the fifth year in a row the Bahamas Financial Services Board (BFSB), along with many of its member firms, attended the Brasil Investment Summit in São Paulo this year. The quasi-public entity was also represented at the STEP LATAM Conference in Panama at the end of November last year and held a BFSB Briefing Visit in São Paulo and Rio de Janeiro on the same trip.

Hoping to increase visitor numbers from the region, the Ministry of Tourism (MOT) has also been targeting Latin America and last year launched a new promotional campaign. Spearheaded by Miami-based marketing and communications firm Grupo bt USA, MOT hopes the campaign will increase the volume of visitors by at least 50 per cent.

The campaign carries the slogan “Bahamas, No lo has visto todo,” which literally translates as “The Bahamas, you haven’t seen everything.”

For The Bahamas to capture more of the market, it is essential that the jurisdiction continues to make this type of effort to break down cultural and linguistic barriers that could hinder access. “The Latin American market is a very natural fit for The Bahamas,” says Beat Paoletto, managing director and chief executive officer at UBS, which is significantly represented in every country in the region. “What we must do–government, institutions, banks, all of us–is to put forward a clear value proposition of what The Bahamas can offer in a way that is attractive to a range of Latin American investors.”

While ties with North America are stronger and longer standing, the key to bringing in more US dollars, according to Sokoloff, is to enhance the domestic environment for investment. “The Bahamas has to continue to improve its tertiary education level and training to develop a diversified workforce. Investors look at two things when they look to invest: the cost of energy and the availability of good quality of labour. Get those two things right and the investors will come.”

In an era of increased regulation, Bahamas’ cadre of top accountants will help the jurisdiction remain compliant and competitive