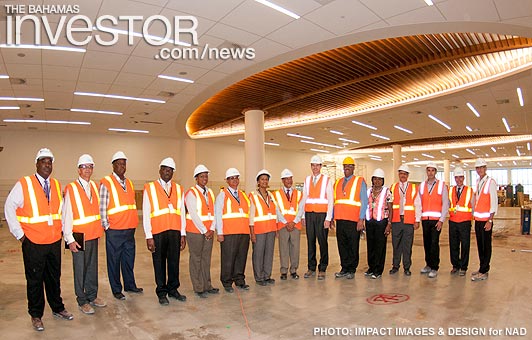 In less than a month, passengers touching down at Lynden Pindling International Airport (LPIA) will have a completely different first impression of New Providence.

The terminal, which marks Stage 2 of the LPIA expansion project, is set to open October 16.

This week, Nassau Airport Development’s (NAD) board of directors, headed by chairman Anthony McKinney, toured the construction site, as contractors put finishing touches on the facilities in time for opening day.

At the peak of construction, more than 500 workers–70 per cent of whom were Bahamian–were on site transforming the former US Departures Terminal into a sleek, three-story structure with barrel vaulted ceilings.

The exterior design also incorporates a mix of 50 per cent glass and 50 per cent solid walls to maximize light and minimize heat intrusion.

General contractor Ledcor Construction commenced work on Stage 2 March 2011. To date, Bahamian firms have been awarded projects worth $38.9 million, equaling 30 per cent of the total value of construction contracts awarded.

An art programme, which started in Stage 1, has been expanded to include six pieces by local artists. All the pieces will be unveiled on opening day.

The final stage in the $409.5-million expansion project is set for completion in the fall of 2013 and involves the construction of a Domestic and International Departures and Domestic Arrivals Terminal.

Higgs & Johnson believes that the new Smart Fund Model 007 is a welcome addition to the innovative financial products already offered by The Bahamas.

Operating losses at oil and gas explorer Bahamas Petroleum Co (LON:PBC) fell to $3.1 million in the six months to the end of June–down from $4.6 million a year ago.