NAD’s maintenance and engineering department is spearheading the project and estimates a 10-week timeline for the initiative.

Built in the late 1950s, the old domestic and international terminal opened for operation in 1957.

Once the building is completely demolished, the land will be used for future airport expansion plans. Consideration is being given to the construction of a new dedicated domestic terminal at the airport.

The site, however, will not be used for the proposed airport hotel. The proposed hotel site is on 4.68 acres of land just northeast of the existing US Departures Terminal building near the airport’s international parking facility. 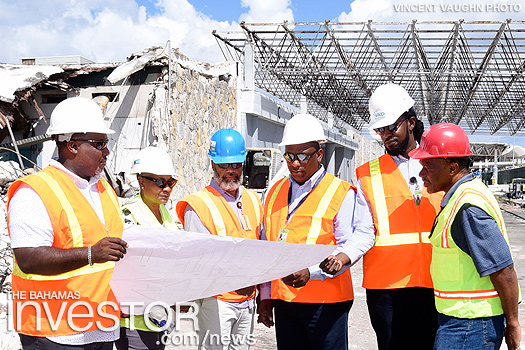 Minister of Financial Services Brent Symonette delivered welcome remarks yesterday to delegates attending the 20th Anniversary STEP Conference, a forum for stakeholders in the financial sector. The two-day event, held under the theme Mind the Gap: Future-Proofing IFCs, is taking place at Baha Mar resort in The Bahamas.

Acting president and CEO of the US government’s development finance institution the Overseas Private Investment Corp will travel to The Bahamas, Jamaica, Haiti, the Dominican Republic, and St. Lucia May 19-22.

Bahamas to host US investment delegation