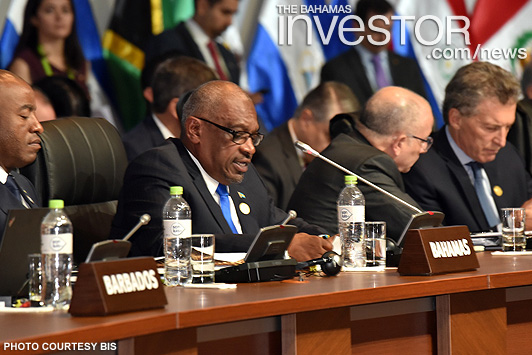 The Prime Minister said that The Bahamas is pleased with the prioritization of education in the Lima Commitments document, given the important role education can play in preventing corruption and bolstering democratic governance.

About 22 years ago, member states of the hemisphere adopted the Inter-American Convention Against Corruption, the first international agreement of its kind in the world.

The Bahamas firmly endorses the tenets of the Lima Commitments document, the Prime Minister said.

“These Commitments establish a baseline which each country of the hemisphere should aim to achieve. The tenets are tools for us to hold each other accountable.”

“It is only through cooperation and collaboration that countries will be able to curtail the webs of corruption that often extend across borders, after involving transnational criminal activity in our interconnected world.”

The Bahamas also applauds the inclusion of a mandate to establish a hemispheric focus upon tax information exchange, “which has until now, been a rather one-sided conversation,” the Prime Minister said.

He added: “Accordingly, we are pleased that the Lima Commitments acknowledge the importance of technical assistance, to ensure states have the necessary support to implement regional and, international anticorruption obligations.”

“Too often as small states we are subject to norms developed without meaningful engagement from us, norms which may not be applied uniformly to all jurisdictions.”

“We look forward to a balanced dialogue, where we meet as equals on matters that are of importance to us all,” the Prime Minister said.

When setting regional or international standards, he said that there is the need to minimize unintended consequences that negatively impact small economies in the region, especially when devising regulatory mechanisms.

“For many developing countries including small island states in the Caribbean region, the unintended consequence of loss of correspondent banking relationships requires a collaborative solution.”

“We must ensure that our efforts do not have as a backlash erosion of regional financial stability and inclusion.”