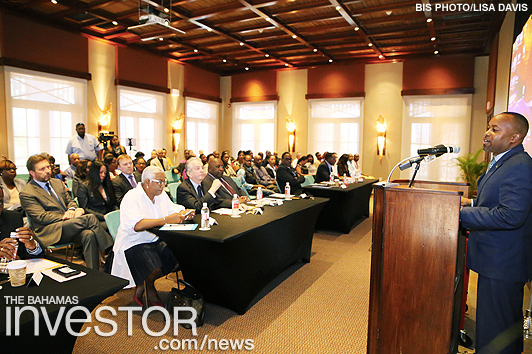 “We have made tremendous progress with respect to that deal,” he added.

Minister Thompson said that they are at the end of the negotiating process with the Grand Lucayan resort and beyond just transferring ownership of a hotel from one company to the another.

“What we are doing is providing a unique destination for Grand Bahama, one that is different and set apart from the rest of The Bahamas,” said Minister Thompson. “We believe that at the end of the day, we will see up to two well-known brand names that have never been in The Bahamas before.”

“This will truly provide a unique destination for Grand Bahama.”

The second annual Business-to-business Expo was held in partnership with the Office of The Prime Minister in Grand Bahama and the Grand Bahama Chamber of Commerce.

According to Minister Thompson, it has been designed to generate much needed growth in Grand Bahama’s local economy.

Minister Thompson noted that the Business Expo serves as an avenue to bring people and businesses together, provide large corporations with local options for their purchasing needs and empower small businesses to frame their services to be able to engage with those large companies.

“The government is confident that through this collaboration, many of the goods and services now imported from foreign vendors can now instead be delivered by Grand Bahamian businesses.”

This year’s Expo included a panel of representatives from Statoil, Pharmachem Technologies and Quality Services Ltd.

In addition to the ongoing mega projects within some of the companies who presented at this year’s expo, Minister Thompson said that the government is excited that several investment projects are presently underway in Grand Bahama that will provide even greater opportunities for local entrepreneurs.

Minister Thompson outlined the various other projects that are in the pipeline of development, which will all help to revive the economy of Grand Bahama: Seaward Fishing Village in Deadman’s Reef; the expansion of the Blue Marlin Cove and the much anticipated $2.8 billion Grand Palm Beach Acquisitions Ltd Resort, which was once known as the Ginn project.

“This project was recently approved in principle by the government and we are now in the process of negotiating a heads of Agreement with the new owners,” said Minister Thompson.

“We’ve seen the Zipline and Water Park recently opened here in Freeport and we anticipate that a well-known skating rink and go-cart facility will be reopening its doors in Grand Bahama. The Wind River Tobacco manufacturing company has recently commenced its operations right here in Grand Bahama, where it is manufacturing tobacco products for export.”

“I recently visited the construction site of one of our major food store owners, who has embarked upon a major, multi-million dollar expansion project.”

“In fact, one of those companies is represented here at this Expo, that is GIBC Digital Co,” said Minister Thompson. “It has already indicated that it is in the process of hiring up to 50 people here in Grand Bahama.”

The National Accounts Section of the Department of Statistics has released revised data series for the Gross Domestic Product of The Bahamas, covering the period 2012 to 2017. Read the revised figures here.

Blockchain technology can help Small and Medium-sized Enterprises in the Caribbean region get access to capital and overcome other obstacles to growth, according to a new report commissioned by Compete Caribbean and the Inter-American Development Bank.