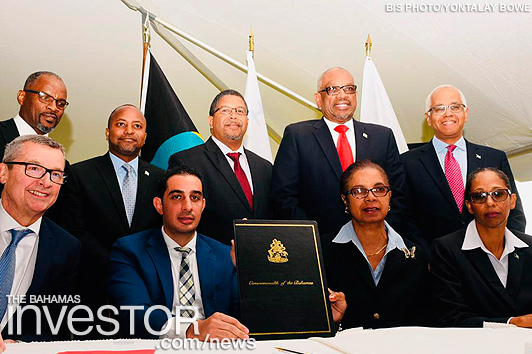 The government of The Bahamas sold the Grand Lucayan March 2, 2020 to a partnership between Royal Caribbean International and ITM (Bahamas Port Investments Ltd), which is expected to make a $250 million investment between the hotel and the redevelopment of the cruise port.

The Heads of Agreement signing ceremony was held on the Great Lawn of the property, some 11 months following the signing of the Letter of Intent March 27, 2019.

Prime Minister of The Bahamas Dr Hubert Minnis said:
“As we stated at the time, it was our intention to privatize the property as quickly as possible. We wanted to ensure that we found the right buyer who shared our vision for the renewal of Grand Bahama. Our vision was the renewal and rebirth of Grand Bahama’s tourism sector and product as an essential element in the restoration of this island’s potential.”

“I am pleased that Royal Caribbean Cruise Line and the ITM Group, trading as Bahamas Ports International, share our vision and decided to invest in the long-term future and sustainability of Grand Bahama. The Developer shared their vision of reinventing the tourism product for land-based guests arriving by air and those arriving by cruise and ferry ships with a distinctive Bahamian flavour and characteristics.”

He continued: “This $250 million dollar investment will go a long way in revitalizing Grand Bahama, with myriad economic and employment opportunities for more Grand Bahamians. After many false dawns, there is an exciting new horizon for our second most populous island and economic centre. Both the government and the developer are investing in the future and possibilities of Grand Bahama. Grand Bahama is at the beginning of a new day.”

As a result of the purchase, 3,000 direct and indirect jobs will be created in construction as well as working at the hotel or cruise port.

Grand Bahamians will reap the benefits of capital investment, employment opportunities for Bahamian workers in the tourism and construction industries, increased commerce for local businesses in the Port Lucaya Market Place, taxi drivers and tour operations. This increased revenue will enable the government to support infrastructural programs.

Additionally, training programs will be offered for Bahamians through RCCL Training Academy as well as opportunities for small businesses and Bahamian entrepreneurs including those producers of Bahamian products.

“With Grand Bahama’s proximity to the large Florida market in particular, this investment will promote sustainable economic growth and development on Grand Bahama. This investment will also expand the experience for cruise passengers to The Bahamas. As you are aware, a high number of cruise experiences are Bahamas only cruises, a strategic advantage for The Bahamas and good economics for cruise lines. Given the many millions of people who enjoy cruises and the size of the market, the new ports in Nassau and Grand Bahama will both enjoy increased numbers.”

“As a result of this development it is anticipated that Grand Bahama will provide a better and more enjoyable overall guest experience to Freeport, Grand Bahama, and promote future traffic growth to Grand Bahama. We must revitalize public infrastructure and provide economic opportunities and incentives for the private sector to invest in the revitalization of properties and businesses.”

The Prime Minister said discussions are currently ongoing to determine the best way to redevelop the Grand Bahama International Airport, which will require a major investment.

Minister of Tourism and Aviation Dionisio D’Aguilar noted that the day could not come fast enough for him, with the opposition to purchase of the property by the government, even though the intention was to own it for only a brief period. Some 18 months later, the property has been sold.

He said: “As Minister of Tourism and Minister with responsibility for this property, I am extremely excited that that the intended purchasers of this hotel are Royal Caribbean and the ITM Group. Between them, they are well funded, bring to the table a great deal of experience in the tourism sector, and have a proven track record of successful projects.”

Hundreds of millions of dollars are to be invested into this property to refurbish/renovate/reconstruct 500 rooms in Phase One and another 500 rooms along with 500 villas in Phase Two. Additional features will include a new casino, a spectacular water theme park and a new shopping, restaurant and retail centre.

D’Aguilar said: “Add to that the new cruise port that is to be built in the Freeport Harbour to accommodate three ships in Phase One and up to seven ships in subsequent phases, and one will quickly conclude that this entire project, hotel and waterpark right here where we are standing plus new cruise port, plus attractions down at the Freeport Harbour is absolutely monumental for tourism in Grand Bahama.” The Central Bank of The Bahamas has released the complete monetary, financial, fiscal and economic statistics through December 2019. Download the full document here.

The Bahamas Financial Services Board has announced that it will be postponing its Landfall breakfast briefing events in the UK and Switzerland scheduled for later this month.