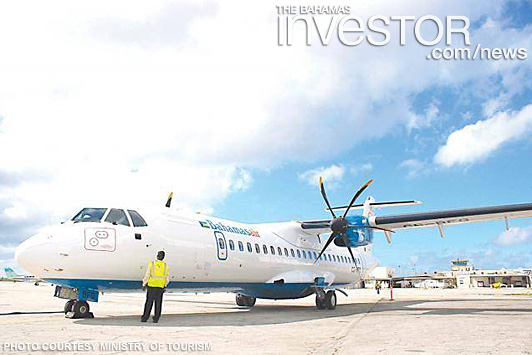 Bahamasair, The Bahamas national flag carrier, has announced that beginning May 3, it will begin non-stop service between Miami and Bimini.

Bahamasair, The Bahamas’ national flag carrier, has announced that, beginning May 3rd, they will begin non-stop service between Miami, Florida and Bimini.

The 30-minute flight between Miami and Bimini will use a 50-seater aircraft – the ATR 42.

Flights will depart Miami at 1:30 pm and arrive in Bimini at 2pm, leaving again at 2:30 pm. The flights are scheduled to run on Sundays, Mondays, Thursdays and Fridays, beginning in May.

Tracy Cooper, Managing Director, Bahamasair Holdings Ltd says of the new service, “The addition of Bimini to our list of destinations underscores Bahamasair’s unwavering commitment to expanding and supporting our tourism product.”

Bimini is known as the gateway to The Bahamas. Some of its well-known visitors include Ernest Hemingway and the late Rev. Dr. Martin Luther King Jr.

The tiny island, which is a seven and a half miles long, boasts some of the most beautiful aquamarine waters in The Bahamas. Bimini is known as the Big Game Fishing capital of the world. Other attractions include The Fountain of Youth, a Healing Hole and the Lost City of Atlantis.

Accommodations on the island include Bimini Big Game Club, the Bimini Blue Water Resort, Bimini Sands and the Sea Crest Hotel and Marina.

One of the latest hotels on the island is the Hilton at Resorts World Bimini. The new 750-acre luxury beachfront resort features the ultimate in first-class accommodation, the largest marina complex in The Bahamas, world-class restaurants, a spacious casino and a lavish spa and fitness centre.

“As the national flag carrier, we are committed to building relationships with industry partners like Resorts World,” said Cooper. “It is our belief that the launch of this new service will benefit the island’s resorts and residents alike.”

The Managing director added, “Bahamasair is proud to launch this new service into one of our country’s most beautiful destinations.”

The European tourism market is remaining buoyant as tourists have more options when it comes to travelling to The Bahamas, according to Ministry of Tourism officials. Watch a report on the current state of the market here.

Silver Airways and Seaborne Airlines have announced that Silver’s acquisition of Seaborne’s business and assets has successfully closed, creating an independent airline to serve the Caribbean, The Bahamas, Florida, and beyond.