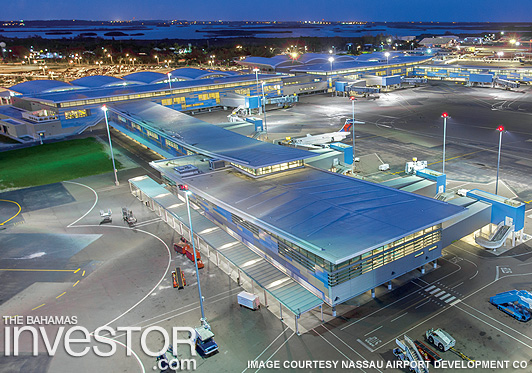 In 2018, we experienced unprecedented passenger growth at Lynden Pindling International Airport (LPIA) with air arrivals into Nassau/Paradise Island climbing to record-breaking numbers. Last year, our airport processed a total of 3,693,146 passengers, an increase of 11 per cent over calendar year (CY) 2017. The growth is significant because it represents the highest year-over-year increase and the largest number of passengers to move through our facilities since redevelopment began in 2007.

The first quarter of 2019 also showed strong numbers, with February 2019 passenger numbers up 21.9 per cent year-over-year and March 2019 up 13 per cent over 2018 figures. During the five-day period between April 18 (Maundy Thursday) and April 22 (Easter Monday), an estimated 75,000 passengers moved through the three terminal buildings at LPIA making it the busiest Easter peak period on record.

Growth trends in air travel have resulted in strong performance in all passenger sectors, with US numbers up 13 per cent; international (non-US) up 17 per cent; and domestic travel up two per cent overall in CY2018. Our industry can credit tourism partners who have aggressively marketed the destination. The Bahamas Ministry of Tourism and Aviation, the Nassau/Paradise Island Promotion Board along with resort properties Atlantis, Baha Mar, Sandals and others are estimated to have spent more than $100 million on marketing.

The Baha Mar effect
New demand for The Bahamas as a tourism destination began to peak with the opening of the Rosewood property at Baha Mar in June 2018. This opening signalled the completion of the $3.4-billion megaresort on Cable Beach. The project encountered considerable delays and a change in ownership over the course of the redevelopment, but with the final phase complete, the resort marked a significant addition to the island nation’s offering.

There were initial fears that the Baha Mar development would cannabalize Atlantis’s customer base but these have proven unfounded, as both properties have invested heavily in marketing campaigns that generated demand with distinct audiences.

The addition of the 2,300 rooms at Baha Mar, as well as the proliferation of alternative accommodation options such as Airbnb, contributed to increased air arrivals into Nassau/Paradise Island.

From an airlift perspective, seat capacity at LPIA grew by four per cent in CY2018. Scheduled seat and flight capacity also saw a strong uptick at the beginning of 2019, with increases of 11 per cent in January and 21 per cent in February, primarily from the North American market.

At LPIA, it used to be that when international arrivals reached approximately 5,000 passengers, we would flag it as a busy day in-terminal. This past February, LPIA recorded nine days with international arrivals of between 6,000-7,500 plus passengers. On March 9, we broke all existing records, processing 8,245 arriving passengers through Bahamas Immigration and Customs.

During the first quarter of 2019, our partners in the US pre-clearance facility at LPIA logged multiple 6,500-7,000 passenger departures days. We also realized record aircraft movements, totalling 13,114 in January this year and 12,386 in February, up 8.58 per cent over the previous year.

NAD continues to work closely with all stakeholders to ensure that the airport performs at a level that provides an exceptional arrivals and departures experience for our users. Our efforts are coordinated and focused on using increased manpower, existing technology and effective communication between agencies to improve the overall operations during peak periods. And we’ve seen success, particularly over an extraordinary Easter travel period.

Air traffic controllers also reported just over 2,500 total aircraft movements (take-offs and landings) during the same period. LPIA successfully executed an operations plan focused on processing areas including pre-board screening in the US Departures Terminal and the International/Domestic Departures Terminal.

Even with the increased traffic to LPIA, our airport痴 customer satisfaction ratings improved throughout 2018 and into 2019. This is significant. It indicates that while growth from a numbers standpoint is key to our overall success, as an airport community we are focused on providing the kind of experience our passengers have come to expect at LPIA.

Out of a total of five points used in our customer survey, LPIA scored 4.36 and 4.34 for overall satisfaction for Q3 and Q4 2018 and 4.36 in Q1 2019. Moving forward, we will continue to provide the level of service that our passengers demand.

Creating more capacity
LPIA was built for growth. To create more capacity, we are undertaking key measures at our facilities in the short- and long-term to better serve our passengers and stakeholders.

Technology will play a critical role in the future of travel at LPIA. Already, US Customs and Border Protection is looking to make its pre-clearance facilities in Nassau one of the early adopters of biometrics technology to better process passengers and improve overall security screening.

Capital improvements on our airside will also assist us with building capacity for future growth. Plans are underway for a complete rehabilitation of Runway 09/27 and Taxiway India. We started this major capital project in the early summer of this year and estimate between four to five months to complete the project. This runway will then be designated as Runway 10/28.

During the rehabilitation period, LPIA will operate as a single-use runway airport, using Runway 14/32 only. We are putting contingency plans in place to facilitate our airside traffic during this period including the implementation of traffic management initiatives to manage air space saturation during peak periods. NAD will implement ‘planned’ and ‘demand’ runway maintenance on the open runway during this period to optimize use of the single runway. We also invested in new equipment to quickly remove disabled aircraft from the runway should the need arise during the period to mitigate the impact to aircraft operations.

Out with the old
This May, we began a phased demolition of the former Domestic and International Terminal building–the final piece of the old airport structure still standing. Built in the late 1950s, the old terminal opened for operation in 1957.

Consideration is being given to building a dedicated Domestic Terminal on the site sometime in the medium-term future. There is also the potential to use the space for additional aircraft parking for domestic carriers “upgauging” their equipment by changing or upgrading aircraft to a similar aircraft with a greater seat capacity.

In January this year, NAD issued a request for proposals seeking proponents to design, finance, construct and operate an on-site hotel at LPIA. The small hotel and multi-use facility is slated to sit on 4.68 acres of vacant land just northeast of the existing US Departures Terminal building at the airport.

Throughout the RFP process, we have encouraged proponents to present a satisfactory financial offer and design with the airport environment in mind. Our goal is to select a partner that is focused on operation efficiency, passenger experience and building with sustainability in mind. Should the bidding and contracting process prove successful, we anticipate a 24 month construction period.

In addition to the airport hotel project, LPIA’s 2011 Airside Master Plan is being updated with a target completion of August this year. The plan calls for a future parallel runway, which would require land currently not owned by NAD. In the spring, we acquired Cabinet approval for 1,448 acres of land to be eventually transferred to NAD. This additional acreage would ensure that the airport has all of the land needed for growth well into the future, inclusive of sustaining commercial opportunities and zoned appropriately to prevent encroachment.

Construction is slated for completion in July this year. The deal includes three stores; a walkthrough duty-free location in the US Departures Terminal that incorporates formerly unused floor space; a Hudson News store; and a duty-free store and kiosk located in Terminal A Domestic /International Departures and Domestic Arrivals. The main store is slated to open August 1, with the other two stores opening Mid-August

These three locations represent a net increase in retail revenue to NAD of 23 per cent based on the company’s first year performance projections.

As passenger numbers grow, we are also seeing success in existing commercial outlets. Our Lignum Lounge concept has exceeded budgeted revenues by 19 per cent in the fiscal year-to-date.

British Airways passengers (Club Class) and priority pass primarily fuel strong numbers in the commercial space. Despite the small footprint and a capacity of 55 passengers, the lounge
is performing well. In the near future, the space will be reconfigured to increase seating capacity by 30 per cent or another 15-20 seats.

Investing in the future
Employee training remains a high priority item for NAD as the dynamic airport environment evolves.

When scheduling training, we looked at the anticipated company needs, as well as international standards and requirements needed by LPIA for certification, and to compete with airports in the region.

LPIA continues to position itself as a major player in the aviation sector in the region and globally within our size category (2-5 million passengers annually). As the major gateway to
Nassau/Paradise Island, we understand our role in a tourism product that continues to evolve and is still in high demand. We are laser-focused on operating and growing the airport to
meet the capacity requirements now and in the future.