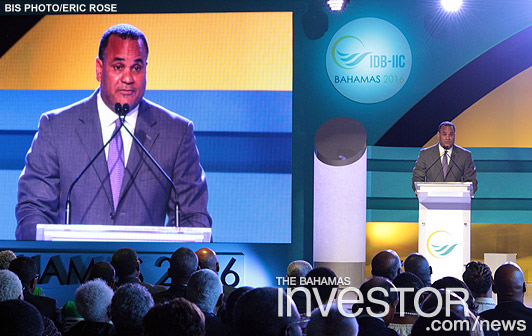 It is the first time a Bahamian was elected to such a post at the IDB level, almost 40 years after The Bahamas became a member country.

“It is my honour as Governor for The Bahamas to accept the chair of this year’s annual meeting of the Board of Governors of the Inter-American Development Bank and the Inter-American Investment Corporation,” Halkitis said as he addressed the Inaugural Session as Incoming Chairman April 9, 2016.

Halkitis said that the high-level meetings provided The Bahamas with the opportunity to showcase not only the country, but also the region, in what there is to offer and the challenges and struggles faced.

“More importantly though, we have the opportunity in a collaborative manner to uncover and embrace the opportunities for growth and development that will result in improving the lives of our citizens.”

Halkitis said that not only does the global economy continue to recover from the global financial crisis at an uneven pace, but also faces the traditional challenges that have “simmered for some time and threaten to boil over.”

He specifically identified those challenges as climate change and its potentially devastating impact on Small Island Developing States; the urgent need for reform in the energy sector to reduce cost, improve competitiveness and support economic growth; and the need to address labour productivity.

“The de-risking threat, if not addressed aggressively has the potential to result in the disconnection of regional economies from international financial settlements, trade financing and remittances. We are grateful for the role the bank is taking in facilitating dialogue among the stakeholders with a view to arriving at a better understanding, and mitigation of these potential impacts,” Halkitis said.

“If challenges and threats represent one side of the coin, opportunity represents the flip side. Those economies that can adapt, innovate and be nimble are those countries that will thrive in the changing global economy.”

“The Bahamas is fortunate to have a development partner in the IDB that is not only a source of development financing, but also a source of technical assistance and research that will enable countries particularly in the region to adapt for growth,” he said. Net flows into the Caribbean Region from 2011-2015 totalled $588 million.

He also said he had no doubt that the entity ‘NewCo’ created at the 2015 meeting in Busan, Korea will engender economies of scale for the bank, and ultimately produce a more focused and tailored approach to doing business with the private sector in the Latin America and the Caribbean region.

The Inter-American Development Bank recently wrapped up its annual meeting encouraging Latin American and Caribbean countries to strengthen their fiscal positions and prioritize infrastructure investments in order to emerge stronger from the economic slowdown.