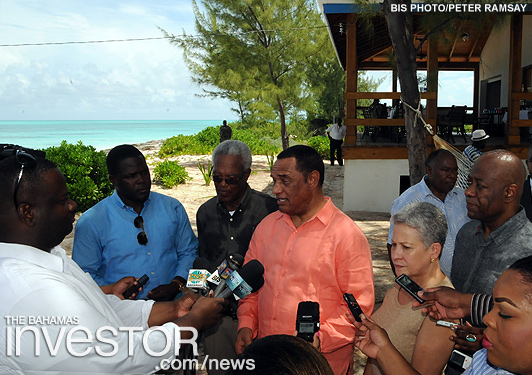 Prime Minister Perry Christie has said that he applauds the entrepreneurship of Bahamian businessman Thomas Basden, who is opening a small resort on Rose Island.

The facility has 12 guest rooms, beachside kitchen, docking facilities and a helipad.

When in operation, the resort will be powered by solar energy and a generator, and will have wireless internet and conference facilities.

Christie said: “It is important that the public is made aware of opportunities that exist in the country. When I first met Mr Basden and came to his resort and saw what he has been able to do here, I felt that it was necessary that his vision received the attention it deserves.”

The Prime Minister said that the government would also support the facility with marketing and publicity.

The Prime Minister’s delegation to Rose Island also included the Minister of Tourism Obie Wilchcombe; Minister of Transport and Aviation Glenys Hanna-Martin; Minister of State for Investments Khaalis Rolle; and government officials from the Ministry of Tourism and members of the local media.

The Bahamas Agriculture and Maritime Sciences Institute on Andros is poised to regenerate local economy, according to BAMSI president Dr Godfrey Eneas. Watch an interview with Dr Eneas here.