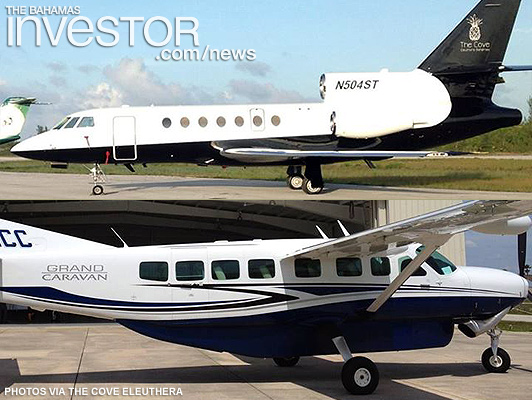 The Cove Express air package offered by luxury resort The Cove, Eleuthera is taking off, providing guests the chance to arrive at the Bahamian paradise in just 45 minutes from South Florida.

ELEUTHERA, The Bahamas, Aug. 2, 2013 /PRNewswire/ — The Cove Express air package offered by luxury resort The Cove, Eleuthera is taking off with guests who want to arrive at the Caribbean paradise in just 45 minutes from South Florida.

Since launching a television advertising campaign in south Florida in late June,  30 charter flights are booked and flights for September and October are filling up. Cove, Eleuthera owner Sidney D. Torres, IV expanded the service to include a fleet of three 9-seat Cessna Caravans. Link: www.facebook.com

“By relying on an expanded fleet of planes we achieve a passenger volume that makes these direct flights affordable,” Torres said.  “The Cove Express eliminates the delays and hassles of layovers.  Once our guests arrive in Ft. Lauderdale or Miami, we can make arrangements to book them on a short 45 minute flight to our resort.”

Torres joined hands with Trend Aviation to guarantee three flights a week on the Cove Express and expects to add a fourth plane, a Falcon 50, www.facebook.com in coming weeks. The Falcon 50 can also be chartered privately.

The Cove Express Package starts at $1,598 for two guests and includes roundtrip transportation from Ft. Lauderdale to Eleuthera and 3 nights of accommodations. To reserve, contact the Cove, Eleuthera at 888-776-3901 or 242-335-5142 or book online at www.thecoveeleuthera.com .

The Cove, Eleuthera  is a Bahamian island legend, reborn with more style, more luxury and far fewer cares in the world. All  villas, guest rooms and suites have been renovated to blend urban chic with island charm. Sitting on 40 lush acres offering direct access to the turquoise blue waters of the Caribbean, The Cove offers an authentic Bahamian island retreat.

President of Genting Americas Colin Ow says that over the next year to 18 months the standard of living for Bimini residents will greatly improve, as the resort and casino operator continues to develop its interests on the island. Watch a Tourism Today report here.

Ministry of Tourism to be restructured – video