The eye of Hurricane Sandy passed near Disney Cruise Line's Castaway Cay at the end of last week. 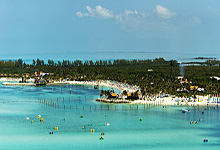 The chances of the eye of a massive hurricane passing over a spit of land in the middle of the Caribbean are as remote as finding the proverbial needle in a haystack, but that appears to be exactly what happened Friday to Castaway Cay, Disney Cruise Line’s private island.

Hurricane Sandy cut a deadly swath through the Caribbean last week, slamming through Jamaica, Haiti, Cuba and finally the Bahamas before heading north and eventually to our area.

[In an odd twist, the hurricane is traveling the same general course taken by the Disney Magic during its recently concluded New York season, which included sailings from Manhattan to the Bahamas and Port Canaveral.]

The Disney Dream was the only DCL ship sailing in the area at the time and cleverly maneuvered away from the storm.

On Castaway during that storm, many of the permanent residents — including our old friend Cecil — were told to board the Dream and enjoyed the security of the ship for a few days.

The remaining Castaway crewmembers hunkered down on the island as the outer bands of Irene hit.

“We do have a crew hurricane shelter on Castaway Cay should we ever need it,” Rebecca Peddie, Manager, Public Affairs Disney Cruise Line, Disney Vacation Club & Adventures by Disney, said last year.

The crew in fact needed that shelter Friday as the eye of the Category 1 Sandy — with 80 mph sustained winds — passed almost directly overhead.

It’s still too early to tell just how badly Castaway was hit.

The captains of both the Dream and the Fantasy guided their vessels away from Sandy, keeping passengers out of harm’s way.

“That’s the beauty of a cruise vacation,” Ms. Peddie added, “you can steer clear of inclement weather.”

Not so an island, however. DCL’s next scheduled stop at Castaway Cay is Tuesday.

This is an excerpt from SILive.com as it appeared on October 29, 2012. For updates or to read the current version of this post in its entirety, please click here.

A British investment banker was killed trying to repair a window shutter as Hurricane Sandy raged through The Bahamas, it has emerged. Timothy Fraser-Smith, 66, chief executive of Deltec Bank & Trust since 2000, fell from the roof of his home in wealthy Lyford Cay late on Thursday, police said.