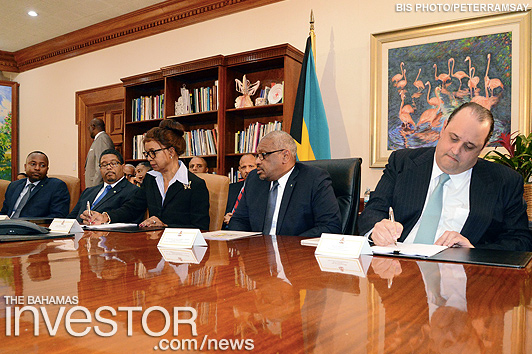 Officials of the government of The Bahamas and Oban Energies February 19 signed the heads of agreement for a $4 billion project planned for East Grand Bahama.

The signing took place less than five days after Prime Minister Dr Hubert Minnis announced in the House of Assembly that the Cabinet of the Bahamas had given Oban Energies the go-ahead to commence the process that will lead to construction of an oil refinery and oil storage facility in Grand Bahama.

The project is expected to create 600 direct jobs and 1,000 indirect jobs during the construction phase.

Monday’s signing of the heads of agreement (HOA) between the two sides paves the way for the environmental impact assessment (EIA) process.

The EIA, which is already underway, will ensure that the project advances in an environmentally safe and sustainable manner.

Prime Minister Minnis said the signing was “an important step in the approval process for Oban Energies.”

“In December of 2016, the government of The Bahamas approved Oban Energies to proceed with the construction of an oil refinery and oil storage facility in Grand Bahama.

“My Government is pleased to have moved this project forward and has successfully completed negotiating the Heads of Agreement, which paves the way for the commencement of this important project,” Prime Minister Minnis said.

Phase One of the project will comprise four million barrels of crude storage, a harbour and deep-sea loading docks to service large vessels, and the construction of a 50,000-barrel-per day refinery.

Oban has committed to employing hundreds of Bahamians during the construction phase and will create “a significant number of well-paying permanent jobs” for Bahamians once construction is completed.

“Grand Bahama has seen significant indirect jobs as a result of the existing storage facilities, and we expect the same for Oban,” Prime Minister Minnis said. “This is a very significant development for Grand Bahama.”

The Bahamian financial services community is increasingly turning to cloud computing to save costs, simplify processes and enhance data security, according to industry expert Scott MacKenzie.