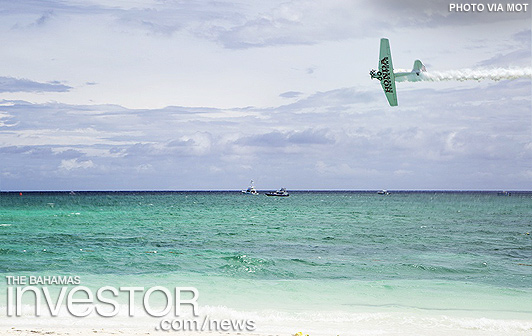 Adults and children were treated to an unforgettable air show hosted by the Ministry of Tourism, and held recently at Taino Beach, Grand Bahama. The air show, a special element of Bahamas Junkanoo Carnival was introduced to create more activities to The Bahamas for tourists.

Adults and children were treated to an unforgettable air show hosted by the Ministry of Tourism, and held recently at Taino Beach, Grand Bahama.

The air show, a special element of Bahamas Junkanoo Carnival was introduced to create more activities in The Bahamas for tourists.

“A few years ago, I was asked to put in place an air show to bring excitement back to The Bahamas in terms of bringing more activities here,” said Chief Pilot and Aviation Specialist for the Ministry of Tourism, Greg Rolle.

“We centered the air show around the Carnival weekend because we thought it would be perfect on the beach. We wanted to remind people that aviation is how we get to various islands in The Bahamas and put it to the forefront.”

The audience was left in awe as the airplanes showed off their skills in basic air gunnery and formation flying. The Cessna 182, a home built plane and an aircraft originally used in World War 2 were just some of the planes participating in the jaw-dropping air show.

Nuvolari Chotoosingh, manager of Sports Tourism predicted that over 100 persons would visit Grand Bahama for the event.

“Some 50 – 60 vintage aircrafts will be here. But in addition to that you’ll have pilots and family members so some 200 persons just for the particular airshow and traffic itself,” Chotoosingh said.

Chotoosingh also expected the entire Grand Bahama Island to come out and enjoy the show.

“I’m expecting the whole Grand Bahama Island to come out to Taino Beach, Friday and Saturday as it’s a wonderful opportunity for everyone to be involved and witness something,” he added.

A career fair was also held for kids between the ages of 8-17 on April 15 that were interested in an aviation career.

“The Ministry wants to expose youngsters to aviation letting them know what it takes to get to that level so they can have a wonderful opportunity to actually gauge where they want to go,” Chotoosingh said.

Sun n Fun in conjunction with the Ministry of Tourism partnered to bring the first Sun n Fun Bahamas Airshow and Exhibition to Freeport, Grand Bahama.

The Road to Carnival is a new tourism promotional campaign and sculpture trail hitting the streets of downtown Nassau in the next few days. Watch a video about the campaign here.