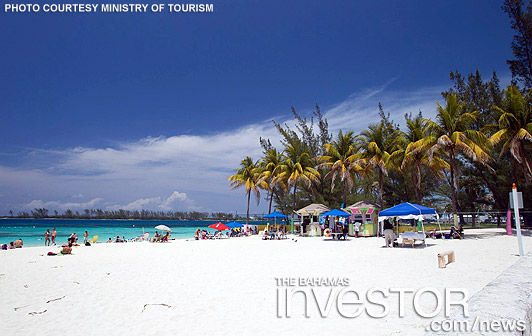 The Bahamas Ministry of Tourism in conjunction with its partnership with Sun n Fun, organizers of the second largest aviation show in the world, are organizing the Grand Bahama Air Show.

According to John Walsh, Air Boss, Air Show producer and Advisor, aviation enthusiasts and guests can expect to be dazzled during the two hour show, which returns to Grand Bahama Island after more than a seventy year absence and commences at 2 pm on Saturday, April 16.

“The aerobatic show will be exhilarating from start to finish,” he said.  There will be lots of smoke from low-lying aircrafts conducting high-speed maneuvers ranging from simple to complex routines and featuring solo acts to precision-formed group performances.

Captain Paul Schutten, one of several participating airshow performers said he “is excited and proud to be participating in the historic fly in over beautiful Taino beach”.

“Expect to experience ten minutes of adrenalin pumping activities from my colorful Super T-6 aircraft,” he said.   Everything you can imagine, from low flying, travelling straight up and straight down and lots of tumbles from upside down to downside up will be performed, ” he said.

Plans are also underway to include a special appearance from one of The Bahamas’ leading amphibious aircraft partners.

As part of the Bahamas Junkanoo Carnival’s opening on Friday, April 15, at 6:00 pm, the organizers will showcase four airplanes as parachute jumpers conduct a special touch down on Taino Beach and then walk the parade with the Bahamas flag, during live singing of the Bahamas National Anthem.

Youngsters between the ages of 8 and 17 years interested in a career in aviation will also have an opportunity to meet with pilots and other industry professionals, during a special seminar on Friday, April 15, between the hours of 9 am and 2 pm. The seminar will be held in the Domestic Terminal at the Grand Bahama Airport.

Tickets for the Grand Bahama Air Show are $10 daily and can be purchased at the door at Taino Beach.  For more information contact:  350-8600 or visit bahamas.com.

The Bahamas’ financial services sector continues to comply with foreign regulators and adhere to global standards, according to The Central Bank of The Bahamas governor John Rolle. Watch ZNS Network news interview with the governor here.

The 2016 Battle 4 Atlantis celebrates the sixth year of the elite collegiate basketball tournament, once again bringing eight top US teams to The Bahamas' Atlantis resort on Paradise Island.