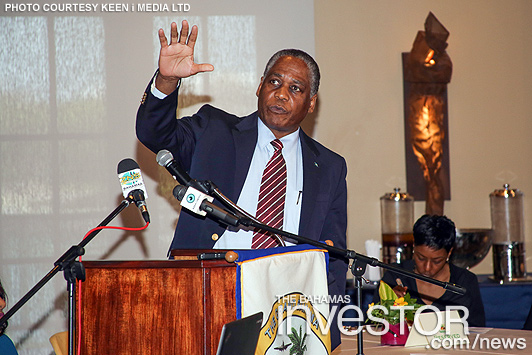 Dr Bethel made the claim while fielding questions from local business owners at the monthly meeting of the Grand Bahama Chamber of Commerce (GBCC) held last week at the Pelican Bay Hotel in Freeport.

“The indications I have are that this current extension of three months is going to be the final extension,” Dr Bethel said. “The government is concluding a number of negotiations locally and abroad with major stakeholders… to bring a resolution to a number of issues which, with the utilisation of the data provided by the review committee, would then facilitate their policy determination.”

Prior to the three-month extension enacted on February 4, the government allowed the Hawksbill Creek Agreement’s concessions to persist for a six-month period as it continued negotiations with key stakeholders on the best way forward for Grand Bahama.

The tax concessions in discussion prohibit real property tax/property levy; personal property tax and capital levies or capital gains/appreciation; and taxation on the earnings the Grand Bahama Port Authority and its licencees.

Among the 12 recommendations the HCARC made to the government was the suggestion that these expiring concessions be extended for 20 years, while the government and Grand Bahama Port Authority (GBPA) collaborate to restructure the governance of Grand Bahama – particularly the Port area – and secure major investors for the island.

During his address, Dr Bethel detailed each of these recommendations, noting that the data was compiled after a three-month period involving extensive research, four town meetings and consultations with 120 representatives from the business and civic communities. He explained that the report was designed to facilitate economic growth and the overall improvement in the quality of life in Grand Bahama.

Also included in the HCARC report are: recommendations that a one-year period be permitted to secure an international investor capable of acquiring majority ownership of the GBPA; that a government-appointed director sit on the GBPA board to establish the government as an advisor in decisions regarding Grand Bahama’s economic future; and that the GBPA maintains transparency through the provision of information on revenue and expenses for municipal services.

Dr Bethel stressed that Grand Bahama’s economic success is dependent on the cooperation of the government and the GBPA. “There is a need for changes in the way the port area is run given the ongoing changes within the ownership of the Grand Bahama Port Authority,” the HCARC chairman said. “Of course, the government has equal responsibility to ensure that the [red carpet is rolled out] for both foreign investors and domestic investors.”

GB Chamber president Kevin Seymour, who also serves as a member of the HCARC, said he is satisfied the committee has compiled a list of “transformational” recommendations that will change the trajectory of the island.

“This is a major initiative that is expected to impact Grand Bahama for at least the next 20 years. This was an effective collaboration between the Grand Bahama Chamber of Commerce, government as well as non-governmental organisations.”

The government of The Bahamas has congratulated Jamaica's new Prime Minister-elect Andrew Holness (pictured) on his recent election of February 25, 2016.

While real estate sales are mixed around the region, according to Caribbean Journal, one market is performing very strongly: The Bahamas. CJ recently reported the jurisdiction has seen a 20 per cent increase in real estate sales volume last year, however the Bahamas Real Estate Association (BREA) President Carla Sweeting has since responded, saying that while the sector is continuing to recover, gains have not been that significant. Read our excerpt from the Caribbean Journal's story here.