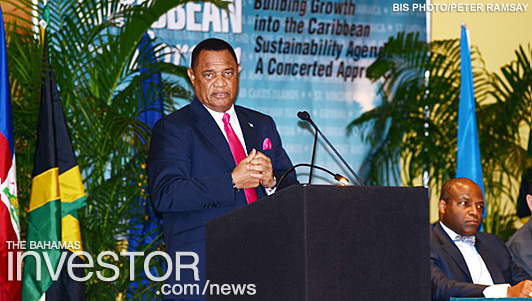 NASSAU, The Bahamas – (Noodls) – Prime Minister the Rt. Hon. Perry G. Christie said International Financial Institutions must become more flexible in how they shape their surveillance of the economies of countries within the Caribbean as well as the policy advice the Institutions provide and the structure of their lending to small vulnerable states.

“There is danger in making the financing resources of the development agencies overly conditional on countries already having entered into stabilisation programmes with the International Monetary Fund,” said Prime Minister Christie.

The goal of the conference, which runs from September 19-20, 2013, is to ensure the Caribbean growth challenge is addressed simultaneously with fiscal and debt sustainability objectives.

Also attending this forum was the International Monetary Fund (IMF).

Prime Minister Christie said it is the pre-emptive and targeted access to development resources that is needed by the Caribbean region’s small and vulnerable countries.

“As far as enlisting the support of larger and more influential shareholders of the International Financial Institutions maybe concerned, I invite you to strive to maintain rather than reduce our access to concessional development financing.”

He said, “You must also stand by our efforts to secure wider shareholder support to inject more flexibility into the design of lending facilities for small and vulnerable middle-income countries.

“Let us continue to strengthen the collaborative approach to formulating policy advice, providing technical financial assistance, which leverage the roles of all development partners.”

The Prime Minister also noted that research that feeds into the forum has found that the average growth in the Caribbean has lagged behind the larger Americas over the last decade.

“This is a worrisome trend because the enhancement of our growth prospects is the key to reducing structural unemployment and sustaining the reduction in public sector debt.

“It will also help to diminish the budgetary cost of resolving domestic sector frailties, which alongside all other interventions require a more accelerated improvement in the economic lot of borrowers.”

He said in the past, there were very compressed discussions on these topics usually in the margins of the annual meetings of the IMF, World Bank, IDB, and the CDB.

“Happily as has been said, this forum allows for a more in depth review of these challenges with a few to finding solutions that regional policy makers and international financial institutions need to pursue on a collaborative basis.”

Prime Minister Christie said, “The fact that this dialogue is taking place as part of the IMF’s enhanced engagement with vulnerable small states is also noteworthy.”

Carnival Cruise Lines is launching a new national advertising campaign this week that features the experiences of the cruise line's guests, as captured through their own lenses at destinations such as The Bahamas. The "Moments That Matter" campaign includes thousands of real vacation photos and videos from past Carnival cruisers, collected through social media.