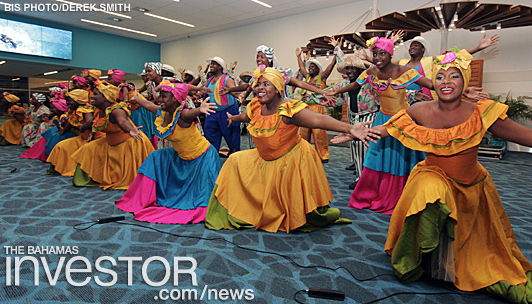 Prime Minister Perry Christie said during the opening ceremony of the new international terminals October 16 that the modernization of the Lynden Pindling International Airport (LPIA) is a lasting tribute to the legacy of Sir Lynden Pindling.

The LPIA expansion project comprises three stages. Stage 1, the US departure terminal, was completed in March 2011. Stage 2 is the new International and US Departure Gates and International Arrivals Terminal, opened this week.

Stage 3, which will comprise the Domestic and International Check-in Hall and Domestic Arrivals Terminal, is scheduled for completion in autumn 2013.

A bronze statue of Sir Lynden will be erected upon the completion of Stage 3.

Prime Minister Christie and Dame Marguerite Pindling participated in unveiling a plaque bearing Sir Lynden’s name and documenting the historic occasion and those involved in the project.

“[The LPIA redevelopment] is the largest public infrastructural project ever to be undertaken in the history of The Bahamas,” said the Prime Minister. “It was designed as the centrepiece to facilitate a plan of economic expansion for the next century. It was also designed to facilitate the easy movement and transportation within the country, providing a proliferation of air links to the outside world in support of the anticipated growth in tourism, financial services, international business, commerce, trade and other enterprises.”

As Minister of Finance, the Prime Minister said he was pleased that the financing model used for this redevelopment project is fairly unique in the region and is being studied and replicated in other places.

The airport is managed by Nassau Airport Development Co (NAD). NAD is responsible for most of the physical infrastructure at LPIA including parking lots, terminals, runways and taxiways.

Minister of Tourism Obie Wilchcombe will head a delegation of government and private sector officials to the International Association of Gaming Advisors summit in Singapore, October 23-25.