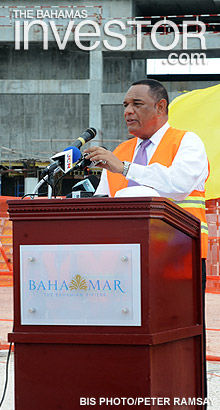 The multi-million dollar mega-resort Baha Mar development on Cable Beach hit another milestone this week with the construction of its landmark casino tower reaching 100ft.

The Prime Minister said: “Whenever a project that is the single largest project ever contemplated and executed in the region is taking place and being on time and on schedule, it is worthy of commendation.”

“The many job opportunities being created for Bahamians during construction and perhaps more importantly the several thousand permanent jobs that will be created when the resort opens, bodes well for the country’s future economic growth.”

Prime Minister Christie said that the achievement of reaching the 100 ft milestone builds credibility for the project and manifests strong confidence in the government and people of The Bahamas.

“I congratulate every worker that has helped Baha Mar reach the 100 ft elevation. I am optimistic and will work assiduously with the developer to ensure that more and more Bahamians will benefit from jobs and entrepreneurial opportunities as this exciting project moves forward.”

The Prime Minister said it is his expectation that Baha Mar would soon be able to announce the selection of a major casino partner.

“Such a partner would add greatly to the marketing clout, customer base and cutting-edge product of the world’s most famous brands represented by your hotel partners: Hyatt, Mandarin, Rosewood and Sheraton.”

He said: “Such an arrangement I believe would draw millions of first-time visitors to The Bahamas from both the established and new emerging markets.”

The completed tower will reach 326 ft. 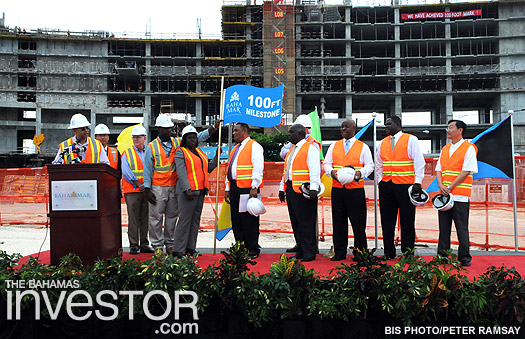 Heads of government of the Caribbean Community agreed to establish a Caribbean Investment Programme during a meeting held July 4-6, 2012, at Gros Islet, Saint Lucia.