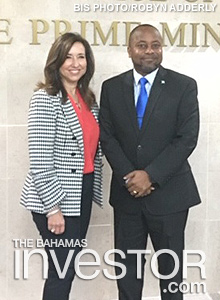 Following the devastation of Hurricane Dorian at the beginning of September, Carnival greatly assisted residents of Grand Bahama by donating much needed relief supplies.

The cruise line also returned to its regular ports of call October 11, 2019.

Additionally, Carnival also had one of its ships, Carnival Ecstasy, come to Grand Bahama Shipyard for repairs October 8, the first ship at the facility following Hurricane Dorian.

Minister Thompson thanked the group for all that they had done for the island.

When the first ship arrived bringing tourists to Grand Bahama, it gave residents a “tremendous boost.” As Port Lucaya had not yet re-opened, some of the business owners relocated temporarily so as to serve the guests, explained the Minister.

Duffy noted that “things like this are a reminder of what really matters” and Carnival is a partner with the island of Grand Bahama and will be one “for a long time.”

Carnival Cruise Lines is expected to build the largest cruise port in the Caribbean at Sharp Rock, East Grand Bahama, and is currently in the process of getting the necessary permits secured to begin.

The cruise port is expected to be completed in 2021.

Tourist arrivals to the Caribbean region including The Bahamas increased by a solid 9.7 per cent during the first half of 2019, when compared to the same period last year, the Caribbean Tourism Organization has revealed.

Holt Financial formally announced at the beginning of the month the launch of its new digital finance platform. The platform provides users with a secure medium to convert cash to cryptocurrency and store multiple currencies.