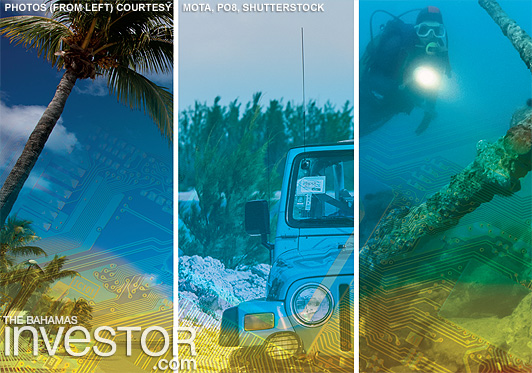 When DevDigital, a Nashville-based software and web development company, established in 2018 by co-founders Peter Marcum and Mitch Ballard, was looking to expand and create a Bahamian subsidiary, Freeport was the logical choice for its new headquarters.

“We love Freeport,” says DevDigital Bahamas partner Alan Kates. “There is a place in The Bahamas for a company such as ours and this was the perfect opportunity to expand. Investors in Freeport are being supported and given exceptional treatment.”

DevDigital is one of the latest wave of investors lured to Freeport by the Commercial Enterprises Act, 2017. The legislation, which came into force last year, is central to the government’s push to transform Grand Bahama into a technology hub as it offers incentives to investors in this sector, including those involved in computer programming, nano-technology, data storage and software design.

“When we saw this legislation, it was a great step,” says DevDigital Bahamas copartner
Hank Ferguson. “The priority is to get Grand Bahama back on its feet. It is a place that has been challenged for the past two decades so there is now some effort to diversify.”

Freeport HQ
DevDigital Bahamas began setting up its operations in January year to handle both local and international clients from the Freeport base, which mainly focuses on back-office operations.

The firm already has a client list that spans several industries, including hospitality and tourism, and is hoping to collaborate with stakeholders in the public sector to offer government departments streamlined and customized services.As it expands, DevDigital Bahamas also intends to establish a Nassau office.

Despite the lure of the capital city, Freeport was always the first choice for its headquarters, according to Ferguson. Grand Bahama’s lower cost of living, proximity to the US and its family island charm were all part of its attractions.“I love the small town feel, but with the big city amenities.”

Both Kates and Ferguson believe there is a buzz about Freeport now, and are impressed by Minister of State for Grand Bahama Kwasi Thompson’s proactive campaign to bring in more investment and cultivate relationships with the international tech industry.

Ferguson says: “We met with the minister and we realized his level of involvement in trying to get this done. It was refreshing and different. He has a personal commitment to this.”

Change takes time however. While DevDigital Bahamas is happy to be in the first wave of tech investment, the company recognizes that there is still work to be done before Grand Bahama becomes a mecca for tech talent. “Things do not happen overnight,” says Kates. “Silicon Valley did not just appear. You have to plan for, and start, that process. All the folks involved have a vision and they have put that vision out there. Hopefully, people such as us
and others will help create it. There is momentum here, but it takes time.”

Enabling entrepreneurs
If Grand Bahama is going to live up to its potential, it must overcome certain hurdles. The team at DevDigital Bahamas says setting up in Freeport has not been without its challenges.

“You have the enabling framework, but some of the key elements are still under development,” says Ferguson. “The cost of energy is not resolved. When you figure that out, you can be a legitimate competitor. If you want to be Silicon Valley you have to fix that. There is a viable opportunity in Freeport for large-scale renewable energy.”

Ferguson would also like to see a more specialized labour pool to help investors hire more locals with the necessary skill sets. The company wants to work with the University of The Bahamas to build expertise and is looking at bringing in computer programmers who would then train and teach students in Freeport. Kates is particularly keen to find and develop talent in Grand Bahama, saying: 徹ur team comes from a creative background and part of our mission is to identify the next incredible designer who has a vision that is local, fresh and different. That is an important part of what we are doing.

DevDigital, which has offices in the US, India and Zambia, prides itself on being a global firm supported by local partnerships and it wants to adopt this model in its Bahamian operations– creating linkages, not just with other businesses, but also fledging entrepreneurs.

“We are passionate about supporting entrepreneurs,” says Kates. “We will invest in the right situation, one that gets us excited. That is part of our growth strategy. We have the ability, the capacity and the desire to identify entrepreneurial companies, help them grow and support them by giving them financial or technical capital.”

DevDigital Bahamas plans to be a fixture in Freeport’s business landscape for many years to come, supporting start-ups, discovering talent and providing job opportunities, while growing its own business. Kates says: “We are not going anywhere. We have a tremendous reputation and our plan is to keep that stellar reputation while we build business in The Bahamas.”

Heading up the Small Business Development Centre, Davinia Blair is at the heart of an initiative to encourage local entrepreneurs