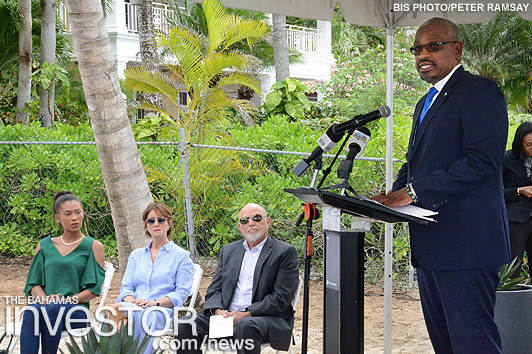 GoldWynn, located on the eastern end of Goodman’s Bay Beach, within the Cable Beach strip, will be a five-storey upscale boutique, beachfront development of contemporary architecture at an estimated cost of $120 million.

“Today we break ground for another development, which will help to further transform Cable Beach,” the Prime Minister said during his remarks at the groundbreaking ceremony of GoldWynn May 23, 2018.

“Over the next many years, the second home market for Bahamians here at home, in the Diaspora, and for non-Bahamians will experience significant growth,” the Prime Minister said. “This growth will help to boost construction, our second largest industry.”

GoldWynn Condo-Hotel and Residences is the brainchild and passion of Paul Wynn, of The Wynn Group of Companies real estate developers, whom the Prime Minister congratulated for his vision.

The development will operate under the Kimpton Hotel and Restaurant brand, and will be managed by Small Luxury Hotels. Construction will begin July 2018 and is scheduled for completion in December 2020.

The developer has agreed to a training and apprenticeship programme for employees.

The developer has also agreed to sourcing and using local agricultural and other products.

This development includes private residences and a condo-hotel and amenities such as a beachfront infinity pool, seaside dining, a theatre, a spa, tennis club, a social house and gallery, a rooftop terrace and pool.

“I note that the developers are committed to a beautification plan for Goodman’s Bay, a favourite beach, recreation and exercise park for Bahamians and residents,” the Prime Minister said. During his address to the Institute of Internal Auditors May 25, Minister of Finance Peter Turnquest said that the government is looking to strengthen the country's cadre of VAT auditors, as well as promoting "transparency, integrity and accountability" in business.

Deputy Prime Minister and Minister of Finance Peter Turnquest presented the 2018/2019 Budget Communication in the House of Assembly yesterday.