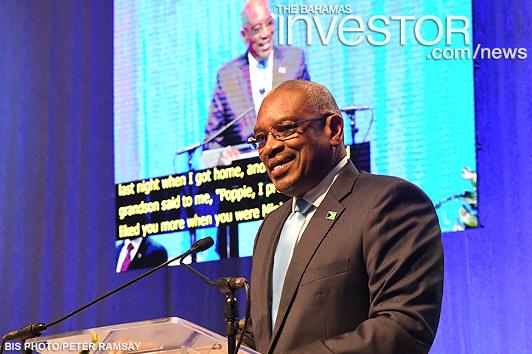 The government of The Bahamas will use smart technology to establish the archipelago as a smart country, beginning with the island of New Providence, according to Prime Minister Dr Hubert Minnis. Pictured: Prime Minister Dr Hubert Minnis addresses the Opening Session of the International Telecommunications Union’s Global Symposium for Regulators (GSR) at Atlantis, Paradise Island. (BIS Photo/Peter Ramsay)

The government of The Bahamas will use smart technology to establish the archipelago as a smart country, beginning with the island of New Providence.

The use of smart technology going forward is expected to positively impact the country and its citizens in a number of areas, among them, education, national security, transportation, disaster management, healthcare, and urban development.

The government of The Bahamas and the International Telecommunications Union formed a major partnership to establish New Providence as a Smart Island earlier this year.

Officials in the Office of the Prime Minister have been working with the ITU Secretariat to expand the project to the entire Bahamas under the BSmart Bahamas Initiative (BSBI).

“The project will result in a BSmart Bahamas Master Plan and the delivery of several pilot projects which can be scaled to our entire archipelago which stretches from southern Florida, US to Cuba,” said Prime Minister Hubert Minnis.

The Prime Minister said the greater use of technology will be critical to achieving his government’s goals as it “carries out its reform and growth agenda.”

Minnis said the plan also calls for the strengthening of the country’s various communication platforms through which the government interacts with its citizens.

“My administration is first committed to ensuring greater transparency, accountability and effectiveness in government. We want to share information with citizens and to receive feedback as quickly as possible and to analyse this feedback to drive policy decisions.”

“We look forward to the day when government contracting is completed seamlessly through online processes. We have already strengthened our customs processes through the use of technology to facilitate trade and revenue collection.”

Prime Minister Minnis said a signature government project “in the coming months” will be the introduction of a centre of government approach to ensure better coordination within government.

Through this project, an IT platform will be developed to provide up-to-date information to the Prime Minister and senior members of government on the status of priority projects and programmes.

Prime Minister Minnis said the modernization efforts and use of smart technology will also impact healthcare in a positive way.

“In the development of our National Health Insurance programme, the integration of medical records throughout the healthcare system will be critical for improving healthcare deliveries and outcomes,” Prime Minister Minnis said.

“I imagine the day when a young, Bahamian mother – using an app on her smart phone – books an appointment for her child at the healthcare facility of her choice and the child’s records will be readily available when she shows up for her visit. At the conclusion of the doctor’s visit, a medical prescription will be seamlessly forwarded electronically to the pharmacist.”

National security, Prime Minister Minnis said, is another area that will benefit from technological innovation.

“We continue to modernize our immigration processes to add new layers of needed security, while minimizing unnecessary delays for travellers.”

“We are committed to bridging the digital divide between government-operated and private schools so that every child has the opportunity to thrive in a modern Bahamas,” Prime Minister Minnis added.

In a statement by the Ministry of Finance the government has said that credit rating agency Moody's decision to place The Bahamas on review for a downgrade was "not unexpected" given the "undesirable state of the fiscal situation". Read the full statement here.

The Prime Minister of The Bahamas Dr Hubert Minnis attended the the 38th Regular Meeting of the Conference of CARICOM Heads of Government in Grenada July 4-6.