Oil exploration could start this year

The Bahamian Senate passed a bill earlier this month allowing shallow-water oil exploration, and it is expected to soon be signed into law by the commonwealth's governor general. The passage of the bill, known as the Petroleum Act, means drilling by the Bahamas Petroleum Co. and partnering companies could start within the year, according to some experts.

February 12, 2016 (KeysNet) –– The Bahamian Senate passed a bill earlier this month allowing shallow-water oil exploration, and it is expected to soon be signed into law by the commonwealth’s governor general.

The passage of the bill, known as the Petroleum Act, means drilling by the Bahamas Petroleum Co. and partnering companies could start within the year, according to some experts.

“I believe we will see these exploratory prospects get under way this year as they are shallow water, and BPC has done quite a bit of seismic work already and knows where to drill,” said Jorge Piñon, director of the Latin America and Caribbean Energy Program at the University of Texas’ Jackson School of Geosciences.

The prospect is not sitting well with at least one Keys elected official.

“It doesn’t take much science to figure out where the Gulf Stream currents run,” said Islamorada Mayor Mike Forster, who owns a restaurant. “It comes right to our shoreline, where we are a fragile water-based economy. No drilling.”

State Rep. Holly Raschien said the issue is ultimately that of the Bahamian people, but it’s one she’ll be paying attention to as plans to drill progress.

“Our waters are home to the only living barrier reef in the continental United States and the third largest barrier reef in the world so we should be wary of the policies implemented by our neighbors,” Raschein said in an e-mail. “Ultimately these are decisions that the Bahamian government and the Bahamian people have to make, but they could have regional implications as well, so I will definitely be keeping an eye on this issue as they move forward.”

The BPC is looking to drill mostly in its four southern oil fields in the Old Bahamas Channel south of the Andros Islands, which is next to Cuba’s exclusive economic zone with the Bahamas.

The other field is off Florida’s mainland.

“There is one BPC field just east of Miami-Dade, Broward,” Piñon said.

But with the price per barrel continuing to slide, there may not be much investment appetite for energy companies to take crude from the ground or from the sea floor, especially at the great depths of areas like the Florida Straits between Key West and Cuba.

“I still remain pessimistic for Cuba to drill in the deep waters of the Florida Straits or Gulf of Mexico any time soon as long as we see oil prices below $65 a barrel,” Piñon said.

At press time Thursday afternoon, oil was below $27 a barrel, the lowest point since 2003.

But Piñon said Cuba could become more interested in exploring its shallow water fields near the Bahamas if BPC strikes black gold there. Several international companies failed to find economically viable oil wells in the Florida Straits in 2012.

The companies, led by Spain’s Repsol, leased a giant semi-submersible oil rig to search for the oil. After spending more than $100,000 a day, Repsol found some crude but not enough to justify the expense of deep water drilling in the area.

“However, if BPC is successful in its four southern offshore fields along the maritime boundary with Cuba, we might see some activity in Cuba’s shallow water block,” Piñon said. 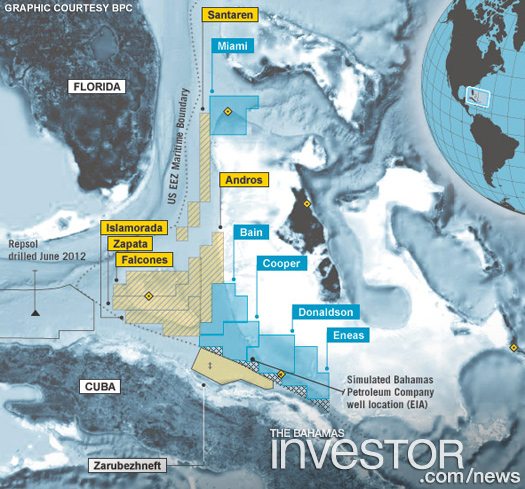 “The Bahamas Advantage: Defining Our Value Proposition” is the theme for the upcoming International Business and Finance Summit, which this year takes the form of a Strategy Conclave for CEOs, senior executives and key stakeholders in the financial services sector. It will take place March 10-12 at the Abaco Beach Resort in Marsh Harbour, Abaco.

Resonance Consultancy (via Bloomberg), a firm that monitors consumer trends, conducts research, and creates development strategies, has rated The Bahamas as the most popular Caribbean destination for rich Americans in its top 16 list.

Bahamas number one destination among US super rich