HOME >
Features >
The future of funds in The Bahamas 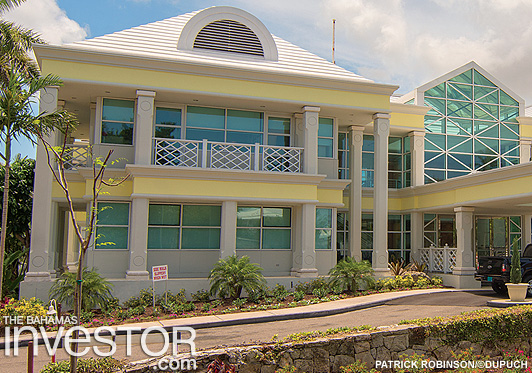 On March 6 this year, Deputy Prime Minister and Minister of Finance K Peter Turnquest presented in the House of Assembly the long awaited Investment Funds Bill, 2019. The debate and passage of the Bill is the culmination of more than two years of drafting, consultation and redrafting undertaken by the Securities Commission of The Bahamas with the intention being to completely overhaul and expand the scope of the investment funds industry in The Bahamas.

For the commission, this journey started in July 2016 with the appointment of a project team consisting of the commission, external legislative drafters and legal advisors as well as leading industry professionals.

At that time, the commission’s expressed aims for the overhaul was to:

1. address legislative gaps which were identified during international as well as internal reviews with the goal being to create a best in class legislative environment;

2. benchmark and develop a regulatory regime that would improve The Bahamas’ competitiveness against leading jurisdictions in the funds space, particularly, institutional funds; and

3. develop AIFMD/EU compliant provisions which would enable Bahamas-based funds and fund managers to be able to continue to market themselves within Europe and position The Bahamas for the EU passporting process once it resumes.

Addressing legislative gaps
In 2012, The Bahamas underwent a financial stability assessment which identified key gaps in the legislative regime for investment funds. Some of the main areas to be addressed centred around the licensing and oversight of key participants in a fund structure including the fund operator and promoter, investment manager as well as custodian.

The principles set out by the International Organization of Securities Commissions (IOSCO) requires standards to be put in place to address how each of these conduct their activities. Also required are ongoing oversight for each. Under the Investment Funds Act, 2003 there was no requirement for the fund manager to be licensed by the commission.

Of course, in the case of funds marketed to retail investors, the licensing standard is obligatory in order to address investor protection concerns.

The new investment funds legislation also sets out standards for the appointment of custodians to a fund and significantly addresses the activities of the fund operators. Minimum standards with respect to the management and valuation of the underlying assets of an investment fund are established with the aim of ensuring the appropriate level of protection for a fund’s investors.

In revamping this regulatory framework, the commission looked at the fiduciary responsibilities, as well as the appropriate ongoing reporting obligations of each of the players. We benchmarked the regulatory oversight against the leading jurisdictions in the industry. In the end, The Bahamas’ funds legislation and regulatory environment establishes a regime which includes appropriate frameworks for the licensing, ongoing supervision (onsite and offsite examinations), investigations and enforcement of regulatory and supervisory requirements, as may be appropriate for all of the various investment fund participants.

Improving the competitive landscape
To improve The Bahamas’ visibility and selection as a jurisdiction of choice for both private and institutional investment funds, the overhaul project took a hard look at the challenges faced by The Bahamas over the years and, in as far as it was possible, tried to make improvements throughout the legislative and regulatory infrastructure. We sought to address those challenges and remove barriers that may have been inadvertently hindering the industry’s growth.

One particular area the new legislation sought to revamp was the centring of fiduciary risks and responsibilities around the investment manager as opposed to the old structure under the IFA, 2003 which placed the principal office, that is, the fund administrator, as the focal point. While this old view has its roots in the historical development of The Bahamas’ industry, it was long past due that we move away from it and appropriately and adequately provide for the effective oversight of asset management activity and by extension, the investment manager where the fiduciary obligation should lie.

The previous lack of oversight of the investment manager meant that the legislation had to assign fiduciary responsibilities to another player and, to the consternation of the fund administrator, that responsibility fell to them. The inappropriate recognition of the administrator’s role versus the investment manager’s responsibilities perpetuated an imbalance that proved too onerous for the administrators of large institutional funds. We had to correct this imbalance if The Bahamas is to be an attractive jurisdiction in the institutional arena.

The legislative overhaul has also sought to rationalize the oversight of Bahamas-based versus non-Bahamas-based funds by reviewing the criteria by which a nexus for regulation ought to be created. The first step in this rationalization is the creation of the trigger for licensing which is now either an investment fund which is incorporated, registered, established or has its governing law in The Bahamas or a fund that is selling itself to retail investors in The Bahamas.

In this instance, the administrator or investment manager would simply advise the commission that they are acting on behalf of such funds. This notification would enable the commission to have full regulatory oversight of the activities of its licensees without attempting to engage in extraterritorial regulation.

Based on the triggers for licensing, which creates definitions of Bahamas-based versus non Bahamas-based funds, the category of Recognised Foreign Funds has been rendered obsolete and therefore does not exist in the new legislation.

Another key feature of the new legislation is the ability of a Bahamas-based investment fund to appoint an administrator from any recognized jurisdiction in the world. Once appointed, the administrator would then appoint a Principal Office in The Bahamas. The definition of Principal Office, in turn, is the address of the fund, with the complete removal of all fiduciary responsibilities which existed under the previous legislation. Other improvements also include definition and clarity around self-administered funds. These changes were the bare minimum requirements in order for The Bahamas to modernize its funds legislation and regulatory environment.

Preparation for EU passporting
On July 22, 2011, the directive 2001/61/EU on Alternative Investment Fund Managers (AIFMD) entered into force in the EU. The directive creates a comprehensive and effective regulatory and supervisory framework for alternative investment fund managers (AIFMs) within the EU, as well as establishing certain regulatory requirements for non-EU AIFMs that provide services to EU investment funds.

The European Commission adopted a number of the provisions of the directive for implementation in July 2012 which were incorporated into the national laws of member states. The rules of the AIFMD therefore became applicable to AIFMs as from July 22, 2013.

The AIFMD also applies to non-EU AIFMs that manage or market AIFs in the EU. Thus Bahamian investment managers to EU funds are impacted by and subject to the requirements of the AIFMD.

The Bahamas has already engaged with and executed 28 Memorandums of Understanding with EU member states in order to facilitate participation in their respective countries. However, as part of the broader regulatory framework for AIFs in the EU, the directive provides for an EU passport for non-EU AIFMs. The passport will enable non-EU AIFMs to enjoy the same rights and subject them to the same obligations, as EU-based AIFMs.

While the directive does not require that the non-EU country, where an AIFM is established, must have AIFMD-equivalent rules, the non-EU AIFMs must be able and willing to operate
in the EU in compliance with rules established in relation to the AIFMD.

It should be noted, however, that as of this writing, the substance requirements under the EU’s Base Erosion and Profit Shifting initiative is requiring non-EU territories to have AIFMD equivalent rules by analogy.

There was a certain degree of urgency for the commission in performing this review within the context of AIFMD/EU passporting developments. While meeting international standards, The Bahamas must also maintain its capacity to conduct business within jurisdictions relevant to the Bahamian industry by meeting the various regulatory oversight requirements which have been established by those jurisdictions with which our industry is interested in conducting business.

We are now confident that the new legislation complies with standards which would enable granting of the EU passport. While this still appears to be a moving target, we have done all we could to benchmark, consult and include all relevant EU requirements.

The commission has also reached out to the European Securities Market Authority (ESMA) to seek review in ESMA’s next round of assessments for passporting once the process resumes.

Conclusion
It is certainly true that the goals for the overhaul of the Investment Funds Act were extremely ambitious. It was imperative though that The Bahamas rose to the challenges of these goals not only to build on its historical successes as an investment funds jurisdiction, but also to forge a new identity as an international financial centre and ensure its survival in the face of increasing global standards and shifting goal posts.

The financial services sector provides a critical element for the economic development of The Bahamas as it has been seen to support the middle class with salaries averaging three times the national average. We must ensure the viability of this sector for the continued economic growth of The Bahamas and in order to do this, robust and modern legislation is just the beginning.