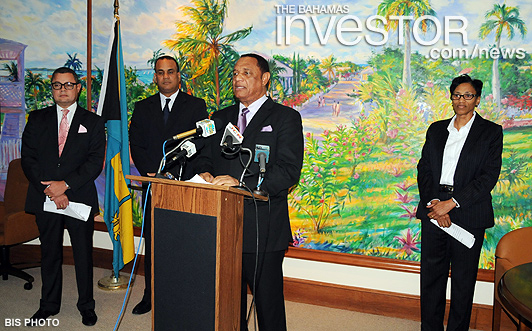 Here follows a statement by Prime Minister Perry Christie made at a press conference held October 31 at The Bank of The Bahamas:

For 25 years, successive governments have worked hard to transform Bank of The Bahamas from a foreign owned entity into a fully Bahamian owned clearing bank with a unique mix of public and private sector ownership, offering to the public a wide range of banking services in New Providence, Grand Bahama and various Family Islands where other clearing banks have historically shown little interest in going.

Today:
BOB is 100% Bahamian-owned : 65% by the Government of The Bahamas, with the remaining 35% being widely held by some 3,500 Bahamian shareholders.

BOB now has total assets of $771 million, compared with only $93 million when the Government acquired ownership of the bank from the Bank of Montreal 25 years ago in 1988.

BOB operates through 14 branches in The Bahamas

With all that successive governments have done over the years as majority shareholders of the bank, the guiding resolve has remained the same:

Although between 1993 and 2012, BOB enjoyed an unbroken record of profitability, it has, in common with nearly all other clearing banks in The Bahamas, experienced reversals either resulting from or exacerbated by the recent global recession and, in particular, the last U.S. recession.

In the case of the Bank of The Bahamas, the Central Bank, under the leadership of Governor Wendy Craigg, has carefully monitored BOB with particular reference to the risks posed by BOB’s portfolio of non-performing commercial loans. As part of this regulatory oversight, the Central Bank has engaged the Ministry of Finance in constructive dialogue on remediation strategies. Out of this has developed a specific plan of action.

I am therefore pleased to announce this plan today. Here is how it will work:

The Ministry of Finance has established a new Bahamian company, Bahamas Resolve Ltd (“Resolve”) which is wholly-owned and wholly controlled by the Government of The Bahamas. Resolve has taken over B$100M in troubled commercial loans from Bank of The Bahamas, thereby removing this risk from BOB’s books. In so doing, the Bank’s revenue prospects will be immediately and significantly improved. At the same time, shareholder value and the Bank’s overall financial condition will be enhanced as well. It will also allow Bank of The Bahamas to return to profitability in the near future and will restore full compliance with Central Bank and international regulatory standards for capital adequacy.

I should like to emphasize, firstly, that no public treasury or National Insurance funds have been disbursed in connection with the assignment of these loans from BOB to Resolve. However, liability for these debts has been transferred to Resolve along with the benefit of the loans and the underlying security. And as the new owner of the transferred loans, Resolve will be putting special mechanisms in place to assist in the collection of the overdue loans.

Secondly, I should also like to emphasize that this transaction, under which $100 million in commercial loan debt has been transferred from BOB to Resolve, was developed in close consultation with BOB’s legal advisors in this matter, Higgs & Johnson, and BOB’s external auditors, Ernst & Young, both of whom have provided affirmative opinions on the transaction.

And thirdly, I should also like to emphasize that this kind of transaction is not fundamentally dissimilar to state-led re-structurings that were done or accommodated for a number of banks in the more developed economies of the world, including the U.S., in the wake of the 2008 recession.

In addition to what I have just outlined, I wish to make it known that the Bahamas Government, consistently with its 65% stake in BOB, will be pursuing new initiatives designed to steer more public sector business and public employee credit demand towards the Bank of The Bahamas. In doing so, however, the Government will, of course, be mindful of its obligation to maintain a fair and competitive commercial environment for all banks in The Bahamas. I have therefore instructed the Ministry of Finance to determine the best course of action for achieving these objectives on a correctly balanced basis.

In conjunction with the elements of the plan that I have just outlined, the Bank of The Bahamas will also undertake re-structuring action of its own to re-align and re-balance the bank’s business model towards more retail banking, consumer lending and e-banking products.

BOB’s Board of Directors has also been directed to assess its management and cost structure, and to submit recommendations to the Government, as the majority shareholder, for management and administrative re-organization, before the end of 2014.

Together, the plan and measures that I have outlined will help ensure the sustained stability and future growth and profitability of BOB. The Bank of The Bahamas bank has a great and prosperous future ahead of it.

The government has enlisted the services of a renowned international arbitration expert from the University of Miami as it continues in its push to become a leading arbitration hub.

The Bahamas Financial Services Board has named Edward Virgil II, acting manager at the East Bay Street Branch of Commonwealth Bank Ltd, as the recipient of the fifth Mentor of the Year award.

BFSB announces Mentor of the Year