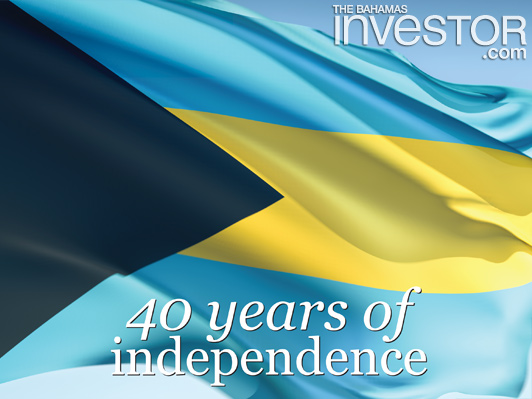 As The Bahamas stood on the cusp of independence July 10, 1973, no one knew what the future would hold. Forty years on, The Bahamas has a stable democracy and a thriving economy built on its two major industries: tourism and financial services.

However, without mineral resources or a profitable agricultural sector, the road to economic freedom has not been an easy one, says Sir Baltron Bethel, senior policy advisor in the Office of the Prime Minister, but one that has been acquired by hard work and determination. “We’ve moved in 40 years from being a colony to being an independent nation that is a part of the international community,” he says.

Economic drivers
Although tourism has remained the main economic driver for the jurisdiction, the financial services sector has been a key contributor to bettering the lives of the Bahamian professional classes by providing well-paid, quality employment in an industry that now accounts for around 15 per cent of the country’s gross domestic product (GDP).

At the dawn of independence, the financial services industry was beginning to flourish. First taking hold in 1936 when the Trust Corporation of the Bahamas Ltd was established, by the early 1970s the sector had grown to include 122 banks and trust companies, in addition to another 140 other institutions permitted to carry out restricted banking here.

The government of The Bahamas recognized the sector’s potential and the assimilation of foreign institutions was to form the basis of the newly liberated nation’s economic vision. In the White Paper on Independence presented to Parliament October 18, 1972, the government also committed to encouraging foreign investment as part of its economic development strategy: “Our total skills must be directed towards maintaining an economic climate which will encourage both domestic and foreign enterprises of a type which is sensitive to the social and emotional needs of the people and to the physical environment which must be protected as one of our great national assets.”

Financial services framework
Among the most important institutions to be created by the newly independent nation was The Central Bank of The Bahamas. Established June 1, 1974, the bank replaced the Monetary Authority set up in 1968. The authority was established to issue currency, develop banking and balance of payment statistics, administer exchange control and advise the government on financial matters. In addition, the new Central Bank was tasked with carrying out monetary policy and providing supervisory oversight for the financial services sector.

The concern for government now was how to provide job security for Bahamians in this burgeoning sector. In order for local workers to fill positions occupied by expats, they first had to become qualified. “Just two years after the birth of the new nation, a significant step was made to build the competency skills of young Bahamians who desired to pursue a career in financial services,” says Kim Bodie, executive director of The Bahamas Institute of Financial Services. “Two very important institutions were established: the then Bahamas Institute of Bankers, now called the Bahamas Institute of Financial Services, and The College of The Bahamas.”

The creation of the former was initiated July 9, 1974, when six senior ranking executives in banks and trust companies met with then Central Bank governor T Baswell Donaldson, and H M Van der Valk–the United Nations advisor to Central Bank–to discuss the formation of a Bahamas Institute of Bankers. The men agreed to act as a preliminary Board of Trustees.

At the fourth meeting January 9, 1975, the group passed a formal resolution bringing into immediate existence The Bahamas Institute of Bankers, and creating a council as its governing body. The original preliminary trustees constituted the first council.

“Donaldson felt it was absolutely necessary to establish a qualification that was specifically designed with quality assurance under the umbrella of The College of The Bahamas to assist young Bahamians in becoming suitably qualified to meet the demands of an emerging financial services sector,” adds Bodie. That first semester, 167 students enrolled in the bankers’ programme.

Also recognizing the importance of professional standards, the Association of International Banks and Trust Companies (AIBT) was formed in 1976. The association campaigns for best business practices amongst its members in keeping with the jurisdiction’s pre-eminent standing. AIBT also focuses on staff training and promoting the industry.

The 1980s
The economy continued to perform well in the early and mid-1980s. Real GDP growth in the 1980-84 period averaged three per cent, despite a US recession in 1981, with a further strengthening of the financial services sector continuing throughout the decade. The Monetary Policy Committee (MPC) was established in June 1980 to track and review monetary and financial trends and developments within the banking sector. In January 1985, the adoption of a code of conduct gave Central Bank a more supervisory role over the banking system. The main purpose of the code was to prevent money laundering.

Central Bank records show that by the end of that year there were 374 banking and trust institutions registered in The Bahamas. Of these, 270 were permitted to deal with the public; 96 were restricted to dealing with or on behalf of certain people or companies; and eight held nonactive licenses.

The absence of income, corporation, inheritance and value added tax, coupled with The Bahamas’ political and social stability, proximity to the US and the adoption of the English law of trusts went a long way in attracting foreign capital to these shores, particularly in the 1980s.

Atlantis rises
At the start of the 1990s, the economy was in a decline, with double-digit unemployment rates. This time, economic rejuvenation was to be led by the tourism sector, with South African business mogul, Sol Kerzner, revamping the industry’s offering with the creation of Atlantis Paradise Island.

The themed resort still remains one of the most ambitious in the region and a major employer for the nation. With nearly 3,000 rooms, 140-acre waterscape and Aquaventure water park, six swimming areas and a $15-million marina, Kerzner International has invested nearly $2 billion in the project since it first purchased the site in 1994. However, the investment put too much strain on Kerzner’s coffers and Brookfield Asset Management Inc acquired the Atlantis Paradise Island resort and the One&Only Ocean Club last year in a $175-million debt-for-equity swap.

Although tourism was leading the charge in the 1990s, other sectors were also making significant strides.

By the early part of the decade, the Bahamas Ship Registry was growing rapidly under the management of the Ministry of Transport. Recognizing the need for a concentrated effort to manage its growing international fleet, the government created the Bahamas Maritime Authority (BMA) in July 1995.

To cater to the rapidly emerging Bahamian capital markets, the Securities Board Act, 1995, was passed and in 1996 the Society of Trust and Estate Practitioners (STEP) Bahamas Branch was founded. Two years later in April 1998, the Bahamas Financial Services Board (BFSB) was launched. The multi-disciplinary body is partly funded by the government and is charged with the promotion and development of the sector and has become a core member of the financial services community since its inception, driving policy and actively engaging the international marketplace.

Other major initiatives during the decade included the incorporation of the Bahamas International Securities Exchange (BISX) and the founding of the Bahamas Association of Compliance Officers (BACO), whose goal is to provide a forum for compliance officers to freely discuss issues related to the execution of their duties and to network and educate themselves on issues of compliance.

International initiatives
Despite these efforts, in June 2000 The Bahamas was placed on the Financial Action Task Force Non-Cooperative Countries and Territories (NCCT) List. The government reacted swiftly, embarking on an ambitious overhaul of financial sector legislation, enacting nine new laws on December 29. Together, these new pieces of legislation provided for more comprehensive and enhanced supervision of financial institutions, corporate service providers and international business companies.

The new laws also established a more coordinated system of deterrence against money laundering and other criminal abuses within
the financial sector and allowed for greater international cooperation
in the oversight of the financial services industry.

Further rounds of compliance initiatives followed the global economic collapse in 2007,
with G20 countries calling for greater transparency in international tax matters. The Bahamas was quick to react, signing into law the requisite number of Tax Information Exchange Agreements and introducing a raft of new legislation in 2011 and 2012 to bolster the financial services sector.

“As a nation we have shown the international arena that we are prepared and are willing to respond to reasonable and legitimate requests of our jurisdiction, in our capacity as a responsible member of the international financial services community, whilst at the same time upholding the legitimate privacy expectations of our clients,” says BACO president Marsha Ferguson.

New legislation, also introduced in 2011, gave the Securities Commission more flexibility and allowed it to be more proactive to keep up with international trends. “The commission is able to promulgate rules for matters, eliminating the need for amendments to the act or regulations in many instances,” says Dave Smith, executive director of the Securities Commission. “This gives the modern regulator greater agility and nimbleness as the securities landscape changes to ensure the regulatory framework is appropriately keeping pace with market developments.”

On the investment front, the single largest foreign direct investment project got underway in February 2011 with the groundbreaking of the Baha Mar resort on Cable Beach (see page 66). The 400-hectare project is being financed by the Export-Import Bank of China to the tune of $2.5 billion.

Future economic freedom
At 40 years of age, The Bahamas’ quest for economic independence and freedom continues, says Olivia Saunders, associate professor of banking, economics and finance at The College of The Bahamas.

Saunders believes that true economic growth has to be evenly distributed. “We have done much to ‘create an investment friendly’ environment for foreign investors. Economic independence and freedom requires similar, if not a more, attractive investment climate for Bahamian investors, so that the social progress we’ve made in education, healthcare and social services is matched by wealth generation by a broader base of Bahamians.”

As globalization continues to gather pace, The Bahamas is seeking to become even more engaged in the world’s economy. Having passed through an intense period of transformation, the nation, Saunders believes, has “the will, human capital and political autonomy necessary to remain globally competitive.”