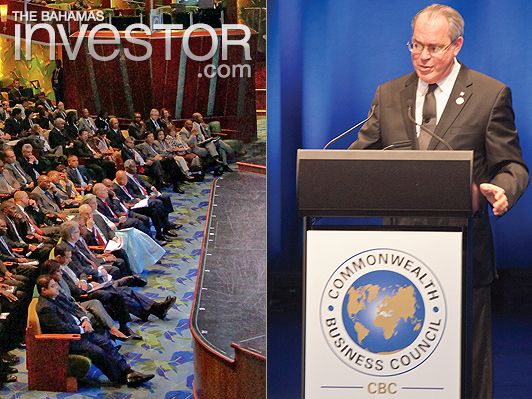 Since achieving independence 40 years ago, The Bahamas has evolved into one of the region’s most vibrant economies. With an average per capita income of around $26,000 and gross domestic product (GDP) of $10.92 billion, the nation ranked the highest among those in the Caribbean region in the Fraser Institute’s Economic Freedom of the World index 2012.

However, increasing globalization and heightened competition in emerging markets means that The Bahamas must continue to leverage any and every opportunity. Part of the armoury at the jurisdiction’s disposal is its status as a Commonwealth nation.

The Commonwealth group of countries stretches across five continents and counts 54 nations among its membership network. In an increasing global trade environment, the benefits of being part of this group are significant. The ease of doing business within the Commonwealth group is facilitated by a legacy that includes commonalities in language, legal systems, administrative procedures and political outlook, all of which are apparent in The Bahamas. Roughly a fifth of the world’s business and commerce takes place between Commonwealth nations, with total trade and investment estimated to be worth around $4 trillion. The cost of doing business for Commonwealth countries trading with one another, according to research published by Reading University in the UK, is 10-15 per cent lower compared with Commonwealth countries trading with those nations outside of the group.

Combined, Commonwealth nations account for 15 per cent of the world’s GDP; 40 per cent of World Trade Organization membership; and around 2 billion of the globe’s population. Moreover, Commonwealth countries register foreign direct investment outflows of around $98.7 billion.

Promoting synergies between the private and public sectors, the CBC holds between eight to 12 major country, regional or industry focused business events each year. Over the course of 2012, it held events in Ghana, India, Kenya, Mozambique, Nigeria, Uganda, Sri Lanka and Zambia and delivered a major business event in London as part of the Queen’s Diamond Jubilee celebrations.

In 2009, CHOGM was held in Trinidad and Tobago and the Commonwealth Business Forum was one of the biggest business events ever held in the region. In 2011, the CBC was instrumental in establishing the Caribbean Investment Forum in Port-of-Spain, which it hopes will become a leading platform for inter-regional dialogue on trade and investment issues. The first event was attended by more than 200 international investors and businesses, including Grand Bahama Port Authority (GBPA) president, Ian Rolle.

Following on from this, the CBC met with GBPA chairman, Ian Fair (see page 57) and the idea was developed to hold an International Business Forum in Freeport. The initiative gained the backing of Minister of State for Investments Khaalis Rolle and Joy Jibrilu, director of the Bahamas Investment Authority (BIA), when they visited London shortly after The Bahamas’ general election in May last year.

“We were impressed by their determination to step up the economic dynamic of The Bahamas and their openness to new ideas and approaches,” says Peter Longworth, director general at the CBC.

Details were sketched out and a date set of February 20-21 this year.

The forum will be a partnership between the port authority, the BIA and the CBC, with the support of the private sector in The Bahamas. The event will be cross-sector, but, says Longworth, will address core business needs and tackle essential economic issues such as energy costs, the potential impact of energy exploration, economic diversification and job creation.

“The event will certainly generate innovative ideas that will give a positive stimulus to economic policy and commercial strategies, but we also want to see solid business outcomes leading to a tangible uplift in trade and investment flows,” he says. By tapping into its wealth of private and public sector contacts and bringing key investors to Grand Bahama, the CBC sees great potential for synergies arising from the two-day event.

“This will not be a talking shop–we are working to see real business opportunities for discussion and execution,” says Longworth.

In particular, the CBC believes Grand Bahama stands to be a major beneficiary of the expansion of the Panama Canal, not only in the maritime and logistics industries, but also in manufacturing, providing the high costs of energy can be resolved. The council also sees great potential in oil and gas exploration.

“As a result, The Bahamas will need to be extremely innovative in encouraging investment and creating a competitive environment for business.”

Increasing investment
Although Longworth is realistic about the impact of the forum saying that “a two-day event will not in itself transform the economy,” he is hoping to see a noticeable increase in investment in Grand Bahama before the end of the year.

“Factors such as the excellent quality of life and climate should never be overlooked as incentives for investors,” he says. “And the structure developed by the Grand Bahama Port Authority is of enormous potential attraction. GBPA is able to prioritize economic development and fast-track decision making to a far greater extent than a traditional government.”

With some long-term assurance from the ruling administration about Grand Bahama’s status under the Hawksbill Creek Agreement, Longworth believes that the island has the potential to become a “globally important trade and investment hub.”

Ultimately, however, the key to sustainable economic growth, says Longworth, is to get more Bahamians investing in their economy. “You can’t expect international businesses to invest, if Bahamians aren’t also willing to do so.”

Investor-friendly Bahamas
So far, the CBC has found The Bahamas public and private entities receptive to the council’s initiatives, developing a mutually beneficial working relationship.

“We have found both the government and Grand Bahama Port Authority to be fully committed to improving the economy and raising the profile of The Bahamas overseas,” says Longworth.

This willingness to embrace new opportunities is a necessary one in a region that is both blessed and cursed by its reliance on the US market. “The heavy dependence on the US economy by The Bahamas became a liability during the financial crisis and recession, although you should never underestimate the resilience of the US economy,” says Longworth. “Being part of the Commonwealth family potentially provides a ready-made global trading network.”

The fight to get noticed on the wider global stage, however, is an ongoing challenge, not just for The Bahamas, but also for the wider Caribbean region. “The greatest challenge is scale. The size of Caribbean markets too often means that investors turn elsewhere. Caribbean countries need to be especially proactive and innovative in their approach to attracting investors and improving their business environments.” What the region lacks in scale, however, it makes up for courtesy of its strategic location. The CBC believes that the region should aim to position itself as an economic hub servicing the entire Americas, particularly the high growth markets of Central and South America. The Bahamas could play a key role by setting an example for its neighbours through public-private initiatives, such as the upcoming forum. “In too many Caribbean countries the investment environment is less than friendly and this is having a negative impact on the wider region,” says Longworth. “We would like to see more governments across the region transforming their approach to the private sector and learning to work better together for the benefit of business.”

The Bahamas offers many wealth solutions for planning for future generations

Your future in our hands