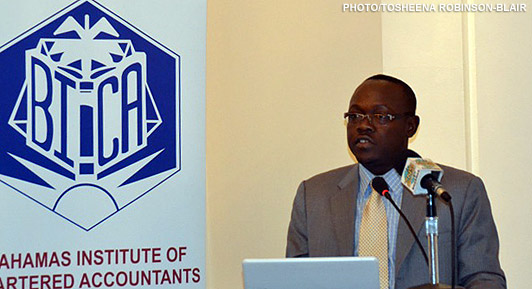 Despite a challenging regulatory and economic environment, the state of the insurance industry remains strong, according to Chester Cooper, president and chief executive officer, BAF Financial and Insurance.

Cooper made the comments while addressing members of the Bahamas Institute of Chartered Accountants (BICA) on future sector trends on June 27.


As chairman of the Insurance Advisory Committee, Cooper has spent the last two years working with regulators to enhance the regulatory environment.


He is stepping down from the role on June 30 to focus on his position as chairman of the Bahamas Chamber of Commerce and Employers Confederation (BCCEC).

According to Cooper, major issues shaping the future of industry include: exchange controls; the Foreign Account Tax Compliance Act (FATCA); capital management; government policy; technology; internal/offshore expansion; and the convergence of banks and insurance companies, among others.

Although the European Partnership Agreement (EPA) calls for a level playing field and free trade in some services inclusive of insurance, Cooper said the local insurance sector remains restricted by exchange controls.

“The future therefore will be shaped by whether or not the government and the Central Bank favorably consider permitting local insurers to access external capital markets.”

As regards to FATCA, which he described as being “KYC [know your customer] rules on steroids,” Cooper said US efforts to improve tax compliance involving foreign financial assets and offshore accounts will no doubt impact the local insurance sector.

“As a result of these pressures, insurers will look to see how they can remove from their balance sheets investments like unlisted securities…that create capital strain unnecessarily. In terms of products, annuities will likely give way to bond funds. Insurers will also look for more advisory type, fee-earning mandates for investment services.”

With regard to government policy, Cooper’s main issue centered around national health insurance.

He suggested a model whereby private sector employees have mandatory basic health insurance plans, while the government covers costs of indigents and seniors, as it does now, via the state-run hospital.

“Nationalizing health insurance, however, will have a detrimental impact on the insurance sector and it is perhaps the unknown that private insurers fear the most; not just about loss of business, but also losses to the government, tax payers and its ultimate sustainability,” said Cooper.

Cooper went on to say that the manner in which insurance is delivered to the consumer will evolve. The Bahamas is one of the few markets where insurance has to be sold via an intermediary.

“This will change over time, as customers become more demanding and sophisticated,” said Cooper.

Moving in the direction of online insurance sales, he said, could reduce the cost of insurance and improve customer experience.

Meantime, given the limitations in the domestic market, many insurers are eyeing expansion opportunities overseas.

For instance, Cooper said, BAF has looked to the Cayman Islands, Turks and Caicos and elsewhere for growth.

“Other insurers are doing likewise, with Latin America being a prime target. The offshore insurance sector, which has shown great returns for Cayman and Bermuda, will attract new interest as domestic insurers seek to export their locally grown expertise, whilst expanding their reach and portfolio beyond the borders of The Bahamas,” he said. “Our educated workforce and mature legislative and regulatory framework will play positively into this trend.”

The US Export Import Bank is encouraging Bahamian businesses to take advantage of its financing programmes.

Bankers get PEP talk for FATF