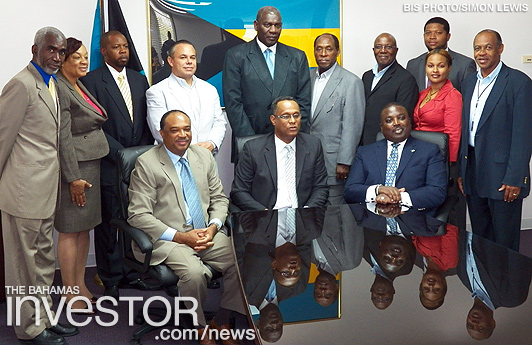 The Ministry for Grand Bahama and the Bahamas Agricultural and Industrial Corp (BAIC) have committed to working together on agribusiness and light manufacturing, according to the Minister for Grand Bahama Michael Darville.

His comment came as he welcomed a team of BAIC officials to Grand Bahama September 19. The group, headed by executive chairman Arnold Forbes began its visit to the island by paying a courtesy call on the Ministry for Grand Bahama.

Minister Darville told the delegation that he believes that the way forward for Grand Bahama is in the area of entrepreneurial development in agriculture, as well as light manufacturing and low energy intensive manufacturing.

The Minister said that as part of the awareness for agriculture in Grand Bahama, his Ministry in conjunction with the Ministry of Agriculture is designing a Cadet Agricultural Programme for students in grades 11 and 12.

“We intend to establish a course at the Bahamas Technical and Vocational Institute (BTVI) and this course will revolve around agriculture, crop science, as well as husbandry and poultry development.” he said.

“The Ministry for Grand Bahama in conjunction with the Ministry of Agriculture is to begin a survey of 30,000 acres of farmland that exist in East Grand Bahama and create opportunities for residents of Grand Bahama,” he stated.

BAIC executive chairman Forbes said he came to Grand Bahama to see how BAIC could assist the Ministry in jump starting Grand Bahama in terms of agribusiness, light manufacturing and light industry.

“We know that Grand Bahama has great potential as pertains to agribusiness and light industry. Grand Bahama at one time was the industry leader as far as industry is concerned throughout The Bahamas, and we want to get Grand Bahama to where it used to be,” Forbes said.