HOME >
News & Press >
Government to get “fiscal house in order”

Government to get “fiscal house in order” 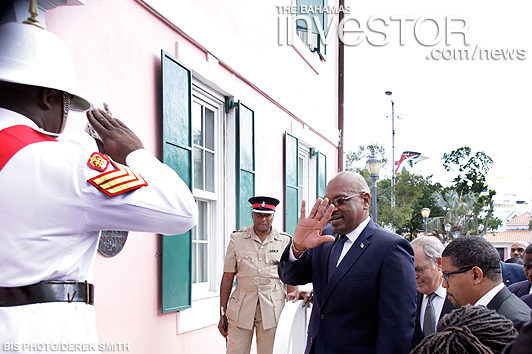 Deputy Prime Minister and Minister of Finance Peter Turnquest said while the government’s transformational growth agenda is visionary and critical to the creation of a better future for Bahamian citizens, he will give the utmost priority to getting the fiscal house in order.

“That is critical to any success that we hope to achieve on the growth and jobs front; ignoring the state of our finances would have deleterious consequences for the viability of our agenda and future prospects for the Bahamian society and economy,” Turnquest said as he presented the Budget Communication 2017/2018 in the House of Assembly May 31, 2017.

He said the government is committed, as a first priority, to working diligently in the months ahead to improve on the fiscal situation and prospects of the nation.

According to the DPM, to this end, the government intends to take action on several fronts over the next three months.

He said the government will undertake a judicious and in-depth review of its expenditure programmes to determine where and how value for money can be enhanced, how effectiveness and efficiency of service can be improved and where savings and reallocations can be secured to both finance the government’s policy priorities and facilitate a more expeditious reduction and elimination of the GFS Deficit.

The DPM explained that as was announced in the Speech from the Throne, the government will strengthen the accountability and transparency of the fiscal operations of government in the Ministry of Finance and as such it has embraced and would vigorously implement the IDB-funded Public Financial Management project details, which are on the government’s website.

“Also as part of this initiative, to bring transparency and accountability to the government’s fiscal operations, we intend to table in Parliament a full list of financial subsidies provided to developers so the Bahamian public can see not only where the value added tax (VAT) money has gone but also where all of the tax money has gone.”

DPM Turnquest said the government will also seek to reduce these subsidies to an irreducible minimum and apply a very rigid test on future requests for financial subsidies to ensure that more money is available to finance the operations of the government.

He said this budget includes funding in the amount of $429 million for 25 state-owned enterprises. “This is $79 million more than last year, primarily because of the introduction of National Health Insurance.`’

“As this is clearly unsustainable, this administration will develop concrete action plans to transform these enterprises either into viable, efficient and self-sufficient entities or transfer them to the private sector and use any gains from these transactions to retire debt.”

The DPM also noted that in a further effort to enhance accountability and transparency in government, it is implementing rules and procedures, through the Constituency Capital Grant Act, to govern the use by Members of Parliament of their annual $100,000 constituency capital grant allocation.

“We will introduce fiscal responsibility legislation that would make it difficult for future administrations to incur deficits unabated. This law would also prevent Ministries and Departments from introducing new spending initiatives in-year without identifying the requisite financing from within their budget allocations.”

He said the government will introduce Public Procurement Regulations to support the amendments to the Financial Administration and Audit Act.

“These amendments will make it mandatory for the government to use transparent bidding procedures when it acquires goods or services from the private sector.

“It will also mandate a certain percentage of government procurement being available for small and medium-sized businesses.”

Turnquest also explained that the government will introduce legislation to strengthen the Office of the Auditor General and provide it with the resources necessary to effectively and properly discharge its responsibilities as mandated by the constitution, without any undue interference from the government.

“We will introduce revenue administration legislation which, if approved, would formally create the Department of Inland Revenue and strengthen the government’s enforcement powers and revenue collections.”

“Individuals and businesses should be alerted that, in this new era of accountability and transparency, this government will adopt a zero tolerance approach to those who do not pay their taxes. We will be fair and transparent in our enforcement efforts but we will also be decisive,” said Turnquest. 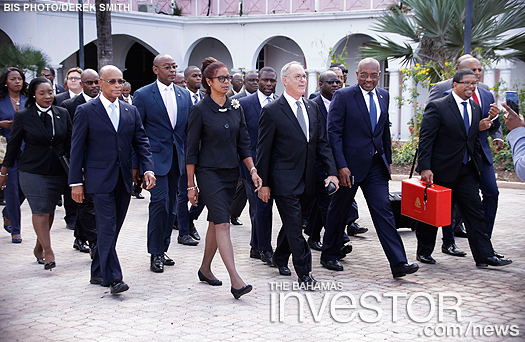 Pictured: Cabinet ministers arrive at the House of Assembly for the Budget Communication, May 31, 2017. (BIS Photo/Derek Smith)

Deputy Prime Minister and Minister of Finance Peter Turnquest presented the new administration's Budget Communication in the House of Assembly May 31, 2017. Read/download the full communication here.