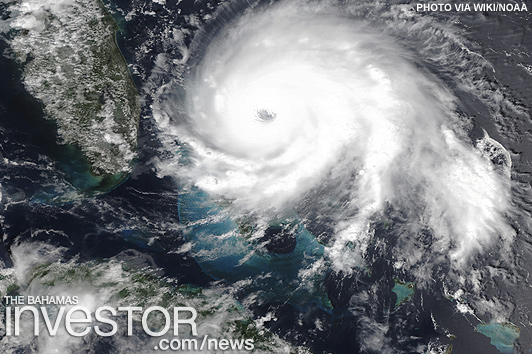 Moody’s Analytics estimates that the initial economic costs to The Bahamas of Hurricane Dorian will be between $3 billion and $5 billion. Pictured: Hurricane Dorian at peak intensity over the Abaco Islands on September 1. (NOAA Photo/Wiki Commons)

Moody’s Analytics estimates that the initial economic costs to The Bahamas of Hurricane Dorian will be between $3 billion and $5 billion.

It also estimates that the overall economic costs of Hurricane Dorian in the region will be between $3.5 billion and $6.5 billion, reflecting damage and lost output.

These estimates are based on preliminary calculations and may change over time as more information emerges.

Adam Kamins, senior regional economist at Moody’s Analytics, notes: “Though this is a far smaller cost than that of other recent hurricanes, the amount is stunning in context of the small geographic footprint of the affected area. On a per capita basis, Dorian packed a punch that may well have been unprecedented.”

Kamins goes on to say that the economic toll is driven predominantly by damage to property. Early estimates suggest that nearly half of the homes on Grand Bahama and the Abacos were significantly damaged. Using data on population per household for The Bahamas and third-party estimates of average house prices, the cost to the residential market is around $2 billion. This accounts for both an upward adjustment to capture personal property and a downward adjustment to reflect that lower-end homes were more likely to be destroyed in the storm.

“Of course, the housing market only tells part of the story,” Kamins adds. “Much of the vehicle stock on both islands was destroyed. This not only includes cars that are inoperable because of flooding, but boats that were lost in the storm. And, of course, infrastructure on the affected islands was devastated. Grand Bahama International Airport in Freeport will require substantial rebuilding, roads have been destroyed, and basic systems such as sewage and water are badly compromised.”

The physical damage will be accompanied by a significant reduction in tourist dollars flowing into The Bahamas, the analysis says.

“The most obvious channel is a reduction in near- to medium-term visitors, which will badly sting a nation where tourism may be responsible for as much as half of GDP. With nearly 20 per cent of the nation’s hotel rooms closed, according to data from The Bahamas Ministry of Tourism, this means that 10 per cent of output may have been removed from the economy. Further adding to the cost is the physical damage to resorts and attractions in Grand Bahama, requiring a major rebuilding effort.”

The Baha Mar resort has announced a tennis fundraising event to benefit victims of Hurricane Dorian across The Abacos and Grand Bahama islands. The event will take place November 7-10 at the resort on Cable Beach.

Engel & Völkers Bahamas has announced that the Andrews Group has joined the brokerage firm at its Nassau office.