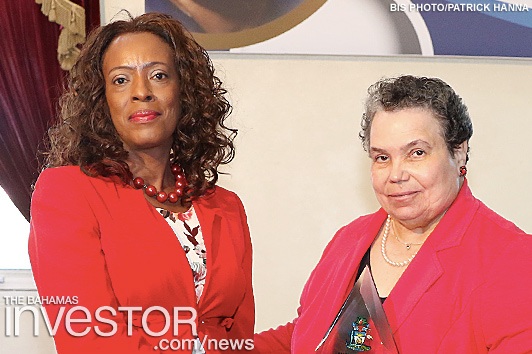 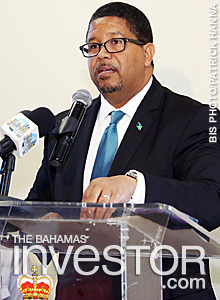 Eugenia Cartwright, the first female treasurer in the Public Treasury Department, has been appointed deputy financial secretary for operations at the Ministry of Finance.

Deputy Prime Minister and Minister of Finance Peter Turnquest said: “This is a very significant role in the way forward for the Ministry of Finance, because for too long the Ministry has been allowed to kind of drift.”

The comments came during an appreciation luncheon for Cartwright at the Paul Farquharson Conference Centre, February 14, 2018.

The luncheon celebrated Cartwright’s 19 years of distinguished public service, not only as the first female treasurer of The Bahamas, but also for being the longest serving treasurer in the country.

DPM Turnquest said: “Those of you who are in the Ministry of Finance and in the Treasury will know that we have suffered from a significant amount of attrition. So we are overworked and understaffed.”

He explained that part of Cartwright’s new portfolio is to help the transition and reformation that needs to happen, to bring in the needed talent, to establish the procedures so that everybody is on one page and the Ministry of Finance is operating as efficiently as possible.

“The Ministry of Finance is going through performance management reform and she will be intimately involved in that programme to ensure that the programme continues to make significant progress so we bring it about in the shortest time possible.”

The DPM said with the complexities of today’s financial environment and the needs of citizens, it is not acceptable that business continues as usual.

“The fact that we are not able to produce financial information on the fly is just a hindering process because by the time as we get information, the event has passed and we are chasing to keep up.”

Cartwright said she regarded it “a privilege” to serve at the Public Treasury, which is an important institution of the government. She also thanked the government for allowing her to serve as the Treasurer for 19 years, as well as those who encouraged and worked along with her over the years.

The first female treasurer in the Public Treasury Department has been appointed deputy financial secretary of operations in the Ministry of Finance. Watch a ZNS Network news report here, along with the week’s other business and finance news.

Downtown Nassau is all set for a facelift, with work already underway on major projects such as The Pointe and a seafront boardwalk, as well as forthcoming plans to utilise public spaces. Watch a report on the redevelopment here.